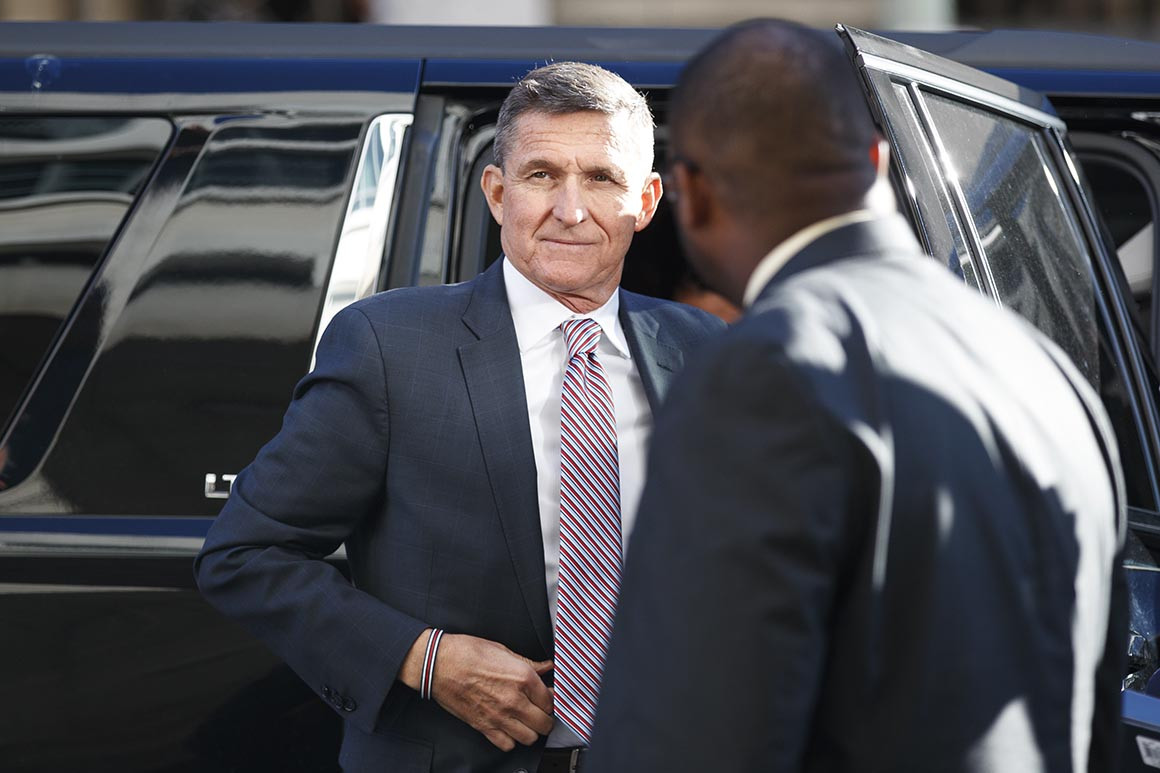 Michael Flynn’s lawyers and prosecutors are at loggerheads, with prosecutor Brandon Van Grack accusing Flynn of going back on some of the facts he admitted to as part of his 2017 deal. | Carolyn Kaster/AP Photo

“You are asking my client to lie,” new Flynn attorney Sidney Powell told prosecutors during the June 27 conference call, according to notes taken by another Flynn lawyer.

“No one is asking your client to lie,” prosecutor Brandon Van Grack shot back, the notes say. “Be careful about what you say.”

Van Grack, a former member of special counsel Robert Mueller’s team who is still assigned to Flynn’s case, became “very heated” during the call, according to Flynn lawyer Lindsay McKasson. Her notes were submitted Thursday to the federal judge in Washington, D.C., who is expected to sentence Flynn on a felony false statement charge he pleaded guilty to in 2017 as part of a plea deal with Mueller’s team.

The newly-released notes provide added details about a dispute that spilled into public view earlier this week after it was revealed that prosecutors had dropped plans to call Flynn as a key witness at a looming trial of his ex-business partner, Bijan Rafiekian.

Rafiekian, better known as Kian, is set to go on trial starting Monday.

Sign up today to receive the #1-rated newsletter in politics

The decision to drop Flynn as a prosecution witness at Kian’s trial startled U.S. District Court Judge Emmet Sullivan, who has repeatedly postponed Flynn’s sentencing in order to allow the former Defense Intelligence Agency chief to demonstrate his cooperate with the government by testifying at the trial.

The court filing Thursday from Flynn’s lawyers was a response to Sullivan’s request for more details from prosecutors and Flynn’s legal team about the reversal and how it would impact Flynn’s sentencing.

As recently as last month, prosecutors gave Flynn high marks for his cooperation. At the initial sentencing hearing last December, prosecutors recommended no jail time for Flynn, who spent 24 days as President Donald Trump’s first national security adviser before being fired for misleading his colleagues and investigators about his contacts with Russian officials.

However, about a month ago, Flynn dropped his lawyers from major Washington law firm Covington & Burling and shifted to a team led by Powell, a Texas attorney who became a major presence on cable TV with barbed critiques of Mueller’s squad.

The move led to speculation that Flynn might adopt a more combative posture towards prosecutors and perhaps even try to back out of his plea deal. Powell insisted when she came on board that Flynn wasn’t looking to do that.

Now, at least some of that prophecy has come to pass. Flynn’s lawyers and prosecutors are at loggerheads, with Van Grack accusing Flynn of going back on some of the facts he admitted to as part of the 2017 deal.

“This is the language your client agreed to,” Van Grack told the defense lawyers during the acrimonious late June call, according to the notes.

Flynn lawyer Bill Hodes said that while his client conceded as part of his plea that some documents his firm submitted to the Justice Department about its Turkey-related lobbying work were inaccurate, Flynn never admitted that those misstatements were intentional or deliberate.

“He did not knowingly make the statements that he knew were wrong,” Hodes said during the call, according to the notes.

The comment prompted Van Grack to responded that an accidental misstatement isn’t a crime. “Without willfully/knowingly it doesn’t make this an offense,” he said, according to the notes.

Prosecutors may also have been alarmed by the fact that Powell was unabashedly hostile to the prosecution’s pending case against Kian, who is charged with acting as an unregistered agent for Turkey’s government and conspiracy.

“Where the hell is your case?” Flynn’s lawyer said, according to the notes. She went on to suggest prosecutors were looking to send Kian to prison for 15 years solely for his involvement in writing an Election Day 2016 op-ed prosecutors say was intended to advance Turkish government interests.

Prosecutors have yet to indicate whether the recent developments will lead to a change in their stance on Flynn’s sentence. Both sides have urged Sullivan to continue to hold off the sentencing because it is possible Flynn could be called as a defense witness at the Kian trial.

For their part, Flynn’s lawyers say he is still cooperating with prosecutors, despite their apparent dissatisfaction with his current stance.

This article tagged under: