Yu Darvish was hit early and often and the Houston Astros beat the Los Angeles Dodgers in Game 3 of the World Series. USA TODAY Sports 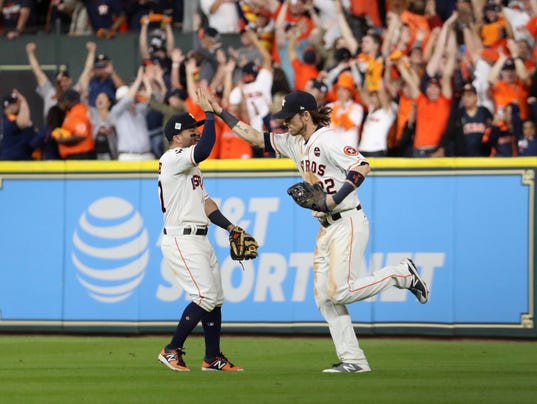 HOUSTON — The noise level in Minute Maid Park starts its crescendo hours before the first pitch, sometimes as early as batting practice, when opposing teams realize this is no ordinary place to play baseball. Especially now, especially in October, when the Astros turn into the kind of team whose vibe says: the world is ours.

That’s what the Dodgers are up against in this World Series, not just the American League champs, but the tens of thousands of fans who pack the stands and generate a decibel level that’s multiplied by a factor of about a million.

Want to know why the Astros prevailed, 5-3 in Game 3 and are that much closer to a world championship? Yes, it’s because Lance McCullers Jr. and Brad Peacock got every big out when they needed them. And it has plenty to do with Yu Darvish, who tanked in less than two innings. But to a man, the Astros say it’s their home field advantage, which has already ruined the Red Sox and Yankees this month and has begun working on the Dodgers, too.

The Astros are 7-0 in Minute Maid in this postseason, which in itself makes history. Only one other team, the 2008 Phillies, won its first seven games at home en route to a World Series, and there’s no hint the Astros will be slowing down any time soon.

“The energy in this ballpark is the difference,” is what manager A.J. Hinch was saying afterwards. His Astros are leading the World Series 2-1 with a chance to finish off the Dodgers without having to return to Los Angeles. The Dodgers still have Clayton Kershaw as a last line of defense in Game 5, but it might be too late by then. The Astros have been a torrent of rolling thunder ever since flattening the Yankees in Games 6-7 of the ALCS by a combined score of 11-1.

A four-run second inning against Darvish said the destruction of the Bombers was no fluke. Six of the line drives the Astros hit off the Darvish exceeded 100 mph in exit velocity. That’s not just knocking a pitcher out of the game, it’s as complete an undressing as you’ll see in October. And it turned the ballpark into a domed asylum.

To say the crowd was loud is like saying Bill Gates has a bank account. There’s been something surreal about Minute Maid ever since Hurricane Harvey brought destruction on this city. The Astros have been a symbol of Houston’s resilience and recovery, winning 18 of their last 20 at home, making it clear they’re here to help. The feeling goes both ways.

“To tell you the truth when I was out there a couple of times I got the chills from (the crowd) screaming so loud,” said Peacock, who picked up the first save of his career.

“I’ve played in a decent amount of stadiums now, at least for postseason ball, and when Minute Maid gets rocking, there’s no place louder,” said McCullers. “So credit to our fans, and we really feed off that energy.”

Of course, it doesn’t hurt that the Astros’ offense, ranked No. 1 in the AL this year, is already frighteningly potent. But accessorizing it with carnivorous ticket-buyers makes it downright unstoppable. How else to explain Darvish’s failure: the more he struggled to find his signature slider, the more primal the atmosphere became until it was clear the right-hander was overwhelmed.

Hinch hinted at Darvish’s uncharacteristic struggle — “it looked like he was out of sorts” — in the shortest outing of his career. In 49 pitches, Darvish generated only one swing and miss. And for the first time in his career (136 starts) he failed to strike anyone out.

That means it’ll be up to Alex Wood to stop the Astros and their loyalists in Game 4 on Saturday. The bad news for the Dodgers is Dave Roberts’ voracious appetite for his own bullpen. He used up five relievers while Hinch was satisfied to let Peacock handle the final 3⅔ innings on his own.

Not only does that mean L.A.’s bullpen will be taxed and that Wood will need to last into at least the sixth inning, it underscores the difference in the managerial philosophies between Roberts and Hinch. One is obsessed with the endless pursuit of the perfect matchup. The other has been influenced by intuition and that old-school metric called momentum. Surely you know which is which.

That’s not to say the Dodgers have completely played themselves out of the World Series. They’re an excellent team with weapons in that bullpen; every reliever Roberts called upon has a resume to die for. But in a battle between pennant winners, sometimes it’s the little things that make the difference.

Like Yasiel Puig’s fourth-inning grounder off Alex Bregman’s glove that rolled into the left field corner. It was a gift single that with one out might’ve started a Dodgers rally — except that Puig wanted more. He hesitated for a moment before rounding first and tried to stretch it into a double.

Little did Puig know he was doomed. The ball ricocheted off the edge of the left-field stands, where Marwin Gonzalez was waiting. He fired a strike to Jose Altuve, who slapped the tag on Puig as he over-slid the base.

The play looked close although Roberts admitted a challenge would’ve been pointless as Puig was out — a victim of Gonzalez’ hustle and knowledge of his home turf.

“The awareness (that) any ball that goes inside the line but hooking a little bit has a chance to catch the corner,” Hinch said. “You see it in Fenway, you see it here. Being familiar with your ballpark is a huge advantage.”

The Dodgers are learning that lesson the hard way: Minute Maid is an October beast.