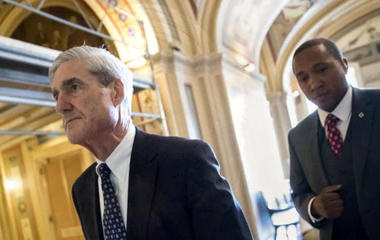 Former federal prosecutor Renato Mariotti says reports that special counsel Robert Mueller got a search warrant for Facebook content could be “the biggest news” related to Mueller’s investigation since a raid on Paul Manafort’s home.

CBS News has confirmed that Facebook turned over materials about Russian ad buys to Mueller’s team, which is investigating Russian meddling in the 2016 presidential election and any ties to the Trump campaign.

Last week, Facebook acknowledged that phony accounts appearing to have originated in Russia bought $100,000 in advertising on its platform during the 2016 presidential election cycle and in the months after.

The Wall Street Journal first reported that Facebook gave Mueller detailed information about the ad buys that far exceeded the information it gave to Congress. Facebook policy dictates that the company will only turn over “stored contents” of an account with a warrant, sources told the Journal. CNN subsequently reported a warrant was used to obtain the information.

In an interview with CBSN on Sunday, Mariotti said that until now, Mueller and his investigators were looking into fairly “narrow” and “specific crimes.”

“Things like false disclosures on forms that Mr. Manafort or Michael Flynn made or Jared Kushner; things like obstruction as to the firing of James Comey. For the first time here, what we’ve learned — assuming that The Wall Street Journal’s report about a search warrant is correct — is that Bob Muller went to a federal judge and presented evidence and convinced the judge that a crime was committed involving foreign individuals contributing to a political election here in the United States through their actions on Facebook,” Mariotti told CBS News’ Elaine Quijano.

Mariotti believes this indicates that Mueller is “closing in on charging foreign individuals in connection with that, which is much more like the sort of thing I think lot of people speculated could come from the Mueller investigation, but frankly we hadn’t seen up until now.”

Mariotti said Mueller would have needed to do two things to secure the search warrant: prove there’s good reason to believe a crime occurred and lay out evidence that the crime existed on Facebook.

“[Mueller] would have to sort of lay out evidence showing that this crime had occurred, not just merely say so, but actually, you know, records that he had obtained, testimony that had been given or interviews that people gave to the FBI, that prove to this judge that there is a good reason to believe that a crime had occurred. It’s a very serious and significant move forward for the Mueller investigation,” Mariotti said.

He said the development likely creates “potential liability” for people in the United States. “If an associate of the president worked with a Russian to further these efforts. For example, if somebody knew about the Russian operation and helped it succeed, they could also be criminally liable,” he said.

He also said the development suggests Mueller is pursuing charges against Russian individuals.

“For the first time, we are seeing the potential that a Russian name and an American name, someone who is associated with the Trump campaign, could appear in the same indictment and I think that is really big news.”

Mueller has convened a grand jury in his investigation.

When asked how often Facebook works with law enforcement and what sort of information the company might share, Mariotti said, “Facebook’s attitude towards law enforcement is aggressive.”

“They kind of have a reputation within law enforcement for being less cooperative, and only giving information when they’ve received court orders and they’re sticklers about that,” he said. “But certainly the fact that Facebook would require a court order doesn’t surprise me at all.”