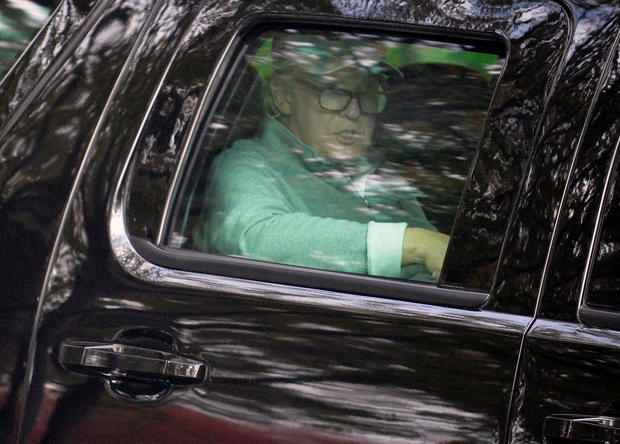 The White House has not responded to the news that a federal grand jury has approved charges related to special counsel Robert Mueller’s investigation into Russian meddling in the 2016 presidential election.

President Trump spent time Saturday at his Virginia golf course and refrained from directly commenting on the news of the charges, CBS News’ Errol Barnett reports.

U.S. President Donald Trump departs after an afternoon at his Trump National Golf Club, Sterling, Virginia, in suburban Washington, U.S., as he returns to the White House, October 28, 2017.

The indictment is currently under seal but is expected to become public as early as Monday. The nature of the charges is not clear, nor is the identity or number of individuals targeted.

In the White House briefing room earlier this week, Press Secretary Sarah Huckabee Sanders said “our position hasn’t changed since Day 1, and we are seeing now if there was any collusion with Russia, it was between the DNC and the Clintons and not our campaign.”

Sanders was referring to the relevation earlier this week that Hillary Clinton’s campaign and the Democratic National Committee contributed funding for research that culminated in the infamous Trump dossier. On Friday, conservative website the Washington Free Beacon confirmed they had first paid Fusion GPS, the research firm that created the dossier.

Mr. Trump sent out a few tweets Saturday, including tweets about National Prescription Drug Take Back Day and thanking former President Carter for recent praise. He also repeated his announcement from Friday that all the remaining JFK files will be released. Mr. Trump also sent a tweet that he wrote was “not at all presidential” and then went on to criticize Michael Moore’s Broadway play.

Just read the nice remarks by President Jimmy Carter about me and how badly I am treated by the press (Fake News). Thank you Mr. President!

Today is National Prescription Drug Take Back Day. Everyone can help fight the #OpioidEpidemic by participating! https://t.co/ONObTWOaOn pic.twitter.com/CYG11DnxH7

After strict consultation with General Kelly, the CIA and other Agencies, I will be releasing ALL #JFKFiles other than the names and…

…addresses of any mentioned person who is still living. I am doing this for reasons of full disclosure, transparency and…

…in order to put any and all conspiracy theories to rest.

Happy #FirstRespondersDay to all of our HEROES out there. We are forever grateful to you for your service, sacrifice and courage 24/7/365! pic.twitter.com/vOcTlyOeyw

While not at all presidential I must point out that the Sloppy Michael Moore Show on Broadway was a TOTAL BOMB and was forced to close. Sad!

JFK Files are released, long ahead of schedule!

Mr. Trump’s longtime ally and confidante Roger Stone, meanwhile, was suspended from Twitter after an expletive-filled rant directed toward CNN after it reported the news about the charges.