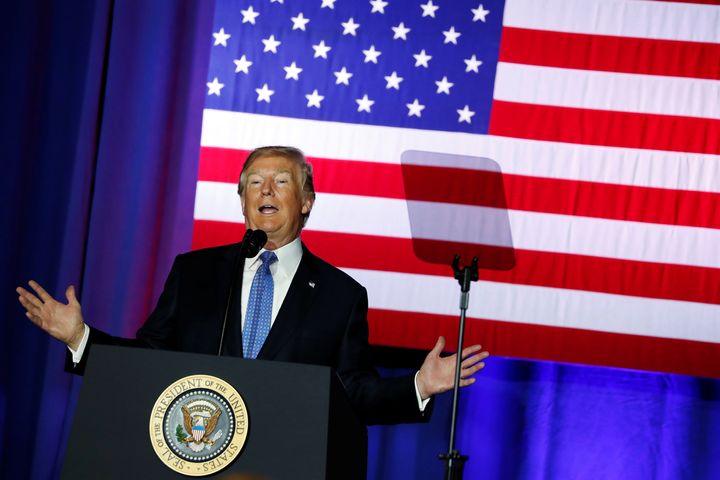 WASHINGTON – President Donald Trump’s tax plan could put $757 million in his own pocket over the likely 10-year lifetime of the proposal, just from the reduction in taxes on so-called “small businesses.”

The vast majority of Trump’s income in the past year came from “limited liability companies” he owns, which are exactly the sort of businesses that would see their maximum tax rate fall from 39.6 percent currently to 25 percent.

“This will be the lowest top marginal income tax rate for small- and medium-sized businesses in more than 80 years,” Trump said Friday at the National Association of Manufacturers. “And it will be rocket fuel for our economy.”

Whether that rate cut would actually fuel economic growth is not clear. What is clear, though, is the scale of the tax savings that would personally benefit Trump: $75.7 million per year, based on a HuffPost analysis of the president’s most recent financial disclosure.

Should Trump’s businesses continue to profit at the same level over a decade, it would mean a total savings of more than three quarters of a billion dollars.

“Clearly it’s a big boon to him personally,” said Susan Harley, a tax policy expert at the liberal-leaning watchdog group Public Citizen. “Anything that reduces that rate we know off the top will benefit him.”

The White House did not respond to HuffPost queries about Trump’s potential windfall from his proposal, and about why the president nevertheless continues to claim that he would not personally benefit from it, and that wealthy people generally would not be getting a tax cut.

In his speech detailing the plan in Indiana this week, Trump said: “I’m doing the right thing, and it’s not good for me. Believe me.”

Critics wondered how Trump could make such a claim, given his many boasts about his wealth and the sworn financial disclosures he has filed since he began running for president two years ago.

“It is preposterous for the president to claim he wouldn’t personally benefit from this tax reform proposal,” said New Jersey Democratic Rep. Bill Pascrell, who as a member of the House Ways and Means Committee has been trying to push legislation forcing Trump to disclose his tax returns. “The Republican Congress is flying blind by endorsing a tax reform proposal from this president without knowing whether he’s proposing to enrich himself. The American people deserve answers and I intend to keep up the fight.”

A precise analysis of Trump’s finances would only be possible if he released his tax returns. Trump promised he would do so should he run for president, but then reneged on that upon entering the race in June 2015.

Huffpost’s analysis was based on a conservative tally of Trump’s “Financial Disclosure Report” dated June 14, 2017. It examined all the sources of income listed, always taking the lower amount when presented with a range between two income values for a particular business entity, and showed a total of at least $569.4 million.

That left a minimum of $518.6 million in income on which Trump presumably was paying taxes at the top 39.6 percent rate.

Had the proposed new rate of 25 percent been in effect last year, Trump’s tax liability would have fallen dramatically for that amount of income, from $205.4 million down to $129.7 million – a savings of $75.7 million.

Unlike standard corporations that pay taxes on profits directly to the federal government, so-called “S” corporations, partnerships and LLCs “pass through” those profits to their owners, who then pay taxes on their individual returns.

The HuffPost analysis ignored the proposed elimination of the Alternative Minimum Tax, which at least in one recent year forced Trump to pay millions in taxes when he otherwise would have paid nothing. It also ignores the proposed repeal of the estate tax, which would save Trump’s heirs from paying hundreds of millions or even more than a billion dollars in taxes, should he die over the 10-year lifespan of his tax proposal.

Although Trump and Republican congressional leaders would like to make their tax cuts permanent, to do so without Democratic support in the Senate would require them to use special budget rules, which also require that bills expire after 10 years unless they do not add to the federal debt in the 11th year. Projections showing that are highly unlikely, given the steepness of the cuts Republicans want.