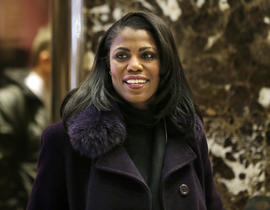 Manigault Newman, who had a somewhat tumultuous tenure in the White House, was fired by Kelly on Tuesday, Garrett reports. Kelly gave her until Jan. 20 to leave. But Newman did not like those terms and tried to renegotiate. Kelly said no. So, she appealed to Ivanka Trump, the president’s daughter, but she took no action. Newman then found her way to the White House residence, where she tripped the alarms. Kelly became angry, and had her escorted from the building. It is unclear who did the escorting.

President Trump thanked her for her service late Wednesday.

Thank you Omarosa for your service! I wish you continued success.

The White House issued a statement Wednesday morning, saying Manigault Newman “resigned yesterday to pursue other opportunities. … We wish her the best in future endeavors and are grateful for her service.” The White House said her departure “will not be effective until January 20, 2018.” However, a tweet issued later by the Secret Service indicated that her ID pass, which grants access to the White House complex, has already been deactivated.

The Secret Service was not involved in the termination process of Ms Manigault Newman or the escort off of the complex. Our only involvement in this matter was to deactivate the individual’s pass which grants access to the complex.

Manigault Newman’s departure comes at the start of what’s expected to be a round of departures heading into the new year. The White House announced last week that deputy national security adviser Dina Powell will leave the administration early next year.

A former White House official told CBS News that Manigault Newman has been a problem since before President Trump was inaugurated. She had personal access to the president and could not be kept out of a White House job, although there was no shortage of efforts to prevent her hiring. She was relegated to the Office of Public Liaison but was still given an “Assistant to the President” title. The first chief of staff, Reince Priebus badly wanted to fire her but was unable to do so. White House chief of staff John Kelly did succeed, where Priebus failed.

Her White House tenure has not been without some tension. In February, one White House reporter, April Ryan, of American Urban Radio Networks accused her of bullying and threatening her. She also reportedly had a shouting match at the National Association of Black Journalists convention earlier this year, in response to questioning about her impact on the president’s views of and policies on law enforcement.

And then, there’s also the uncertainty about what it is she actually does in the White House. This impression was cemented in November, when Manigault Newman allowed Elaina Plott, reporting for the Daily Beast, to follow her around for part of her day at the White House. The resulting story was headlined, “No One Knows What Omarosa Is Doing in the White House — Even Omarosa.”

Manigault Newman was a vocal advocate for Mr. Trump during his presidential campaign and had previously accompanied the president-elect while on the trail, serving as his director of African-American outreach. Manigault Newman later joined the transition team after the 2016 election where she served on the executive committee.

She joined the administration as director of communications for the White House Office of Public Liaison, working on outreach to various constituency groups.

In the months after joining the White House, Manigault Newman ruffled feathers in her role within the administration. The Congressional Black Caucus called out the White House aide after she extended an invitation to the 49 members of the caucus to the White House for a meeting.

Manigault Newman, whose official title is Assistant to the President and Director of Communications of the Office of Public Liaison, was ridiculed on Twitter for signing the letter as “The Honorable Omarosa Manigault.”

The CBC had been skeptical of Manigault Newman’s role as an advocate for the black community in the Trump White House and her self-publicized degree of influence. A CBC source told CBS News that the group was not interested in what they predicted would be another “photo-op.