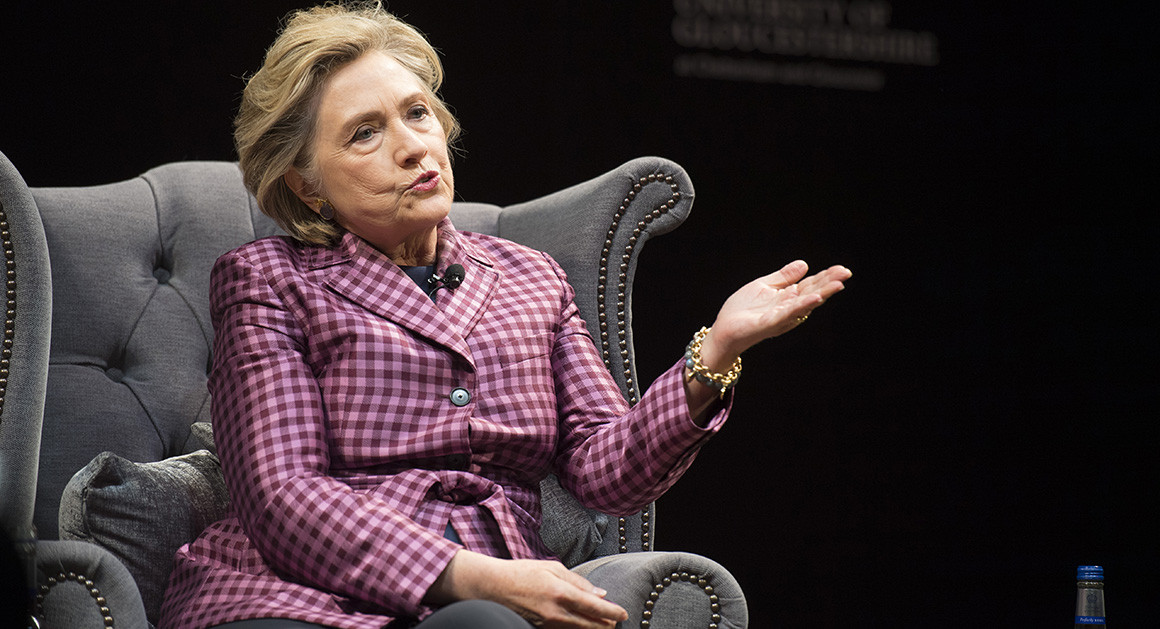 Former Secretary of State Hillary Clinton is interviewed by Mariella Frostrup (not pictured) at the Cheltenham Literature Festival on Oct. 15 in Cheltenham, England. | Matthew Horwood/Getty Images

The White House has been anticipating for months that special counsel Robert Mueller would eventually file criminal charges in his Russia investigation. But President Donald Trump, his lawyers and senior administration officials were all caught off guard by the news.

Two of Trump’s top lawyers were traveling out of town when the first report broke Friday night that a federal grand jury had approved the first indictment in the probe into Russian interference in the 2016 election. One of Trump’s personal attorneys, Ty Cobb, was relaxing on his deck in South Carolina, while the entire team was still working to confirm the veracity of the CNN report over the weekend.

The lack of information, on a case that could have major ramifications for the president, left many current and former Trump advisers livid, focusing their rage on how the information leaked and on a forever target: Hillary Clinton.

“It is unusual for prosecutors to file indictments under seal and then have it leak out,” said Mark Corallo, a former spokesman for Trump’s legal team, noting that the only people in the loop would be the prosecutors and agents on Mueller’s team, the grand jurors and the judge. “This was an ill-advised leak of information,” Corallo added. “I’m disgusted by the tactics of the prosecutors to leak the information.”

That leak, he said, left the White House in an uncomfortable position. “All you can do is wait and see,” he said.

The latest news came at a point of low morale in the West Wing, where many officials see the one-year mark of the administration approaching and are starting to consider their graceful departures. The Trump administration has also struggled to deliver major legislative achievements on the president’s key priorities such as health care, which has contributed to the Republican congressional leadership’s do-or-die bind on passing tax reform legislation.

The most reliable politics newsletter.

Sign up for POLITICO Playbook and get the latest news, every morning — in your inbox.

On Saturday, the president appeared to be abiding by his wait-and-see strategy on Russia. His Twitter feed remained unusually quiet for a weekend morning, and he spent the warm fall day at his Trump National Golf Club in Sterling, Virginia.

In recent days, the president has been sticking to his long-held mantra when it comes to Russia, according to associates who have spoken with him. He maintains that Mueller is on a wild goose chase if he’s trying to find any connection between the president and Russia, because there’s nothing to find.

But silence from the commander-in-chief didn’t stop some finger pointing from his closest advisers over the weekend, as people waited to see the size of the axe that might fall as early as Monday.

Some Trump allies expressed skepticism of the go-along-to-get-along legal strategy advanced by the president’s personal attorneys, Cobb and John Dowd. The two have been the main internal proponents of a strategy to cooperate with Mueller’s investigation by turning over all emails and documents requested. That they were given no head’s up about the charges on Friday “is a huge indictment of their cooperation strategy,” said one close Trump ally.

Others, however, said that charge was unfair until it was clear who the indictment applies to — and if it even applies to someone with any connection to the White House.

The president’s political adversaries, however, were not waiting to see if the person under indictment was connected to the White House before deciding the story spelled bad news for Trump.

“It obviously should be a matter of concern,” said David Axelrod, a former top adviser to President Barack Obama. “The indictment of associates of the president is never good news. Even if the charges are not directly related to the campaign or the president, this is the way prosecutors often work in unraveling larger puzzles.”

“This was a tremendously successful week,” counselor Kellyanne Conway said in a text message Saturday, slapping away any sense of dread building in the West Wing. “Budget passed, which is a critical step toward tax cuts; GDP again at 3%; ‘Russia collusion’ boomeranged toward the Democrats; the President and the First Lady delivered a major policy speech and nationwide call to action on opioids and drug demand; POTUS is preparing for his first trip as President to Asia.”

The rest of the administration’s media strategy on Saturday consisted of a scramble to shift any conversation about Russian collusion over to Hillary Clinton’s failed campaign — a difficult sell when it was former Clinton campaign chairman John Podesta whose personal email account was hacked by the Russians last year. “The evidence Clinton campaign, DNC & Russia colluded to influence the election is indisputable,” press secretary Sarah Huckabee Sanders tweeted Saturday morning, with a link to an article from The Federalist website detailing how Democrats paid for the Steele dossier on Russia.

Outside surrogates pushed the same line. “The speculation is so insane right now,” former Trump adviser Corey Lewandowski told Fox News on Saturday. “What we should be focusing on are the continued lies of the Clinton administration.” It was not clear what “Clinton administration” he was referring to.

Sebastian Gorka, a former White House official who now runs a pro-Trump super PAC, said in an interview: “It’s very peculiar that just as we’re finding out about Hillary’s responsibility with the dodgy dossier, now’s the time that we can expect some action out of the special prosecutor’s office. It’s far too suspicious.”