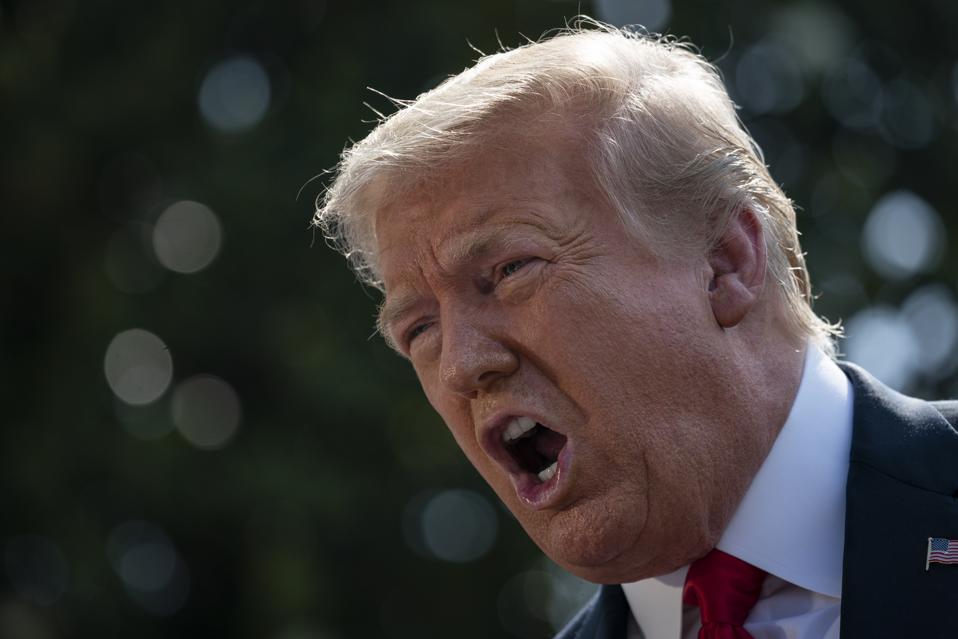 WASHINGTON, DC – JUNE 23: U.S. President Donald Trump speaks to reporters before boarding Marine One … [+] on the South Lawn of the White House on June 23, 2020 in Washington, DC. Trump is traveling to Arizona where he will tour border-wall-construction operations in Yuma, later speaking to a conservative advocacy group in Phoenix. (Photo by Drew Angerer/Getty Images)

The video, which was initially posted Saturday afternoon, shows Trump supporters and anti-Trump protesters engaging in agitated verbal encounters, so of which include profanity.

The footage was reportedly filmed at The Villages, a retirement community located in central Florida.

Early in the clip, protesters chant “racist” at an unidentified man and woman driving by in a golf cart decorated with signs that say “Trump 2020” and “America First.”

The man driving the cart then slows down to address the protesters and twice shouts “white power” and raises his fist.

The president quote-tweeted the video and wrote: “Thank you to the great people of The Villages. The Radical Left Do Nothing Democrats will Fall in the Fall. Corrupt Joe is shot.”

When asked about the president’s tweet Sunday morning, Republican Sen. Tim Scott said, “There’s no question he should not have retweeted it, and he should just take it down… It is indefensible.”

Roughly four hours after he posted it, amid an immediate backlash, Trump deleted the tweet.

The White House did not apologize for the tweet, saying instead: “President Trump is a big fan of The Villages. He did not hear the one statement made on the video.”

Over the past five weeks, following the May 25th killing of George Floyd in police custody, Trump has been accused of fanning racial tensions, as countless protests railing against systemic racism have been held throughout the United States. According to a new U.S. State Department report, racially and ethnically motivated terrorism—particularly from white supremacists—is “on the rise and spreading geographically.” Late last month, Trump appeared to threaten violence against rioters (whom Trump called “THUGS”) in Minneapolis following Floyd’s death, tweeting, “When the looting starts, the shooting starts.” In early June, Trump declared that his administration “will not even consider the renaming” army bases named after confederate generals. Two weeks ago, the FBI announced that a U.S. Air Force sergeant who allegedly murdered law enforcement officers in California during June protests was associated with the right-wing Boogaloo movement, which has ties to white supremacists and neo-Nazis. Last week, an intelligence assessment warned that the Boogaloo movement could look to “incite civil unrest or conduct violence encouraged in online forums.”

“I’ve not seen that video or that tweet, but obviously neither the President, his administration nor I would do anything to be supportive of white supremacy or anything that would support discrimination of any kind,” Alex Azar, the U.S. Secretary of Health and Human Services, told CNN on Sunday morning.

In 2017, a Unite the Right rally was organized by white supremacists in Charlottesville, Virginia, protesting the removal of a Confederate Robert E. Lee statue. In the violent, race-fueled riots that followed, Trump faced widespread criticism after saying that there was “blame on both sides” and that there were “very fine people on both sides.” This prompted bipartisan outrage, as many Republicans and Democrats saw the president’s words as equating the actions of the white nationalists and Nazi sympathizers to those of the counter-protesters. In April of 2019, Trump defended his initial comments, saying, “If you look at what I said, you will see that that question was answered perfectly.”

White Supremacist Terrorism ‘On The Rise And Spreading’ (Forbes)