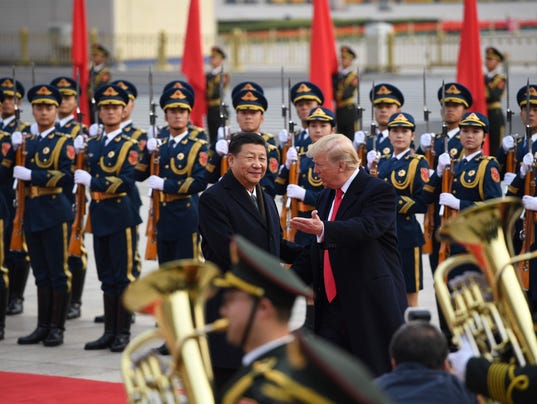 Trump also criticized various Chinese trade policies and protested the “out of control” U.S. trade deficit with China, saying “we have to fix this because it doesn’t work” — though he said he did not blame China for trade problems, placing the fault instead on his predecessors in the White House.

“Who can blame a country for being able to take advantage of another country for benefit of their citizens? I give China great credit,” Trump said during the pivotal stop on his 10-day tour of Asia.

“Too bad that past administrations have allowed it to get so out of kilter,” he added.

Xi, who on Wednesday feted Trump with a tour of the Forbidden City, a colorful opera, and a dinner, told his American counterpart he is looking for “a new starting point” in relations between the U.S. and China. “For China,” he said, “cooperation is the only real choice, only win-win can lead to an even better future.”

While he pledged to consider Trump’s requests on trade and North Korea, the Chinese leader did not make any new commitments.

Looking forward to a full day of meetings with President Xi and our delegations tomorrow. THANK YOU for the beautiful welcome China! @FLOTUS Melania and I will never forget it! pic.twitter.com/sQoUWIGAiQ

The two leaders spoke after announcing more than $250 billion in Chinese purchases of U.S. products ranging from soybeans to aircraft parts — though the deals did not address longstanding U.S. complaints about market access and intellectual property theft in China, issues that Trump raised throughout the day.

The purchase agreements with China reflect the strategy of a president who considers himself a consummate deal maker, though some analysts said Trump’s transactional approach neglects the need for long-term changes in the way China conducts global business.

“Deals are no substitute for policy change,” said David Dollar, a senior fellow on the Chinese economy at The Brookings Institution.

Regarding China, soon to be the world’s largest economy, Dollar said: “What would really change the relationship is opening up new markets in areas from autos to entertainment to social media. There seems to have been little discussion of this kind of policy change either in preparation or during the trip.”

Thursday’s meetings between Trump and Xi came after a pageant-like welcoming ceremony at the Great Hall of the People in Beijing.

As Chinese children waved U.S. and China flags, Trump and Xi strolled down a red carpet to review the troops stationed in front of the massive hall adjacent to Tiananmen Square. A band played the Chinese and American national anthems, as well as patriotic tunes like The Stars and Stripes Forever.

In pursuing deals during his trip to Asia, Trump is trying to get China to put more economic and diplomatic pressure on North Korea and force it to give up nuclear weapons. The former New York businessman also wants China to expand more its markets to U.S. producers and end intellectual property theft.

Trump was full of praise for Xi and China on what is probably the most important stop of his Asia tour, at one point telling his Chinese counterpart, “You’re a very special man.”

Quite a contrast from the presidential campaign, when Trump constantly argued that China stole jobs from the United States, particularly manufacturing jobs in the heartland. At one point, candidate Trump had said, “We can’t continue to allow China to rape our country and that’s what they’re doing.”

So far, China has offered resistance to President Trump’s new overtures on trade and North Korea.

Xi and his aides have said their influence with North Korea is limited. They have also defended their economic practices, saying they are determined to protect Chinese business and industry, and that the Americans have questionable practices and closed markets of their own.

Trump has sought deals throughout his Asia trip. During his first two stops, he asked the leaders of Japan and South Korea to buy more U.S. military goods, and both replied they are eager to do so.

In Beijing, Trump lauded China’s agreements to buy more U.S. products, and expressed confidence that the countries would work together on North Korea and “the unfair trade practices” that are hurting U.S. workers.

Often, the deals Trump announces are not really new, said Dollar of the Brookings Institution. Many have been in the works for a long time, or are extensions of existing agreements involving things like agricultural products, he said.

“Deals are cheap wins and represent a cheap substitute for long-term strategic gains for U.S. companies in market access,” said Elizabeth Economy, director of Asia Studies with the Council on Foreign Relations.

All of that “requires long-term, multi-level strategy, not simply a transactional mentality.” she said.

The deals announced this week in Beijing “help the Chinese placate president Trump during a two-day state visit,” Economy said, “but they don’t require China to change the way it does business.”

Completing his Asia tour in the days ahead, Trump is expected to dicker with more leaders on the sidelines of economic conferences in Vietnam and the Philippines.

His meeting list includes Russia President Vladimir Putin on the sidelines of the Vietnam conference. It comes at a time when a special counsel in the United States is investigating Trump campaign associates in connection with Russia interference in the 2016 presidential campaign.

As with Xi, Trump wants Putin to exert more economic, political, and diplomatic pressure on North Korea over its nuclear weapons.