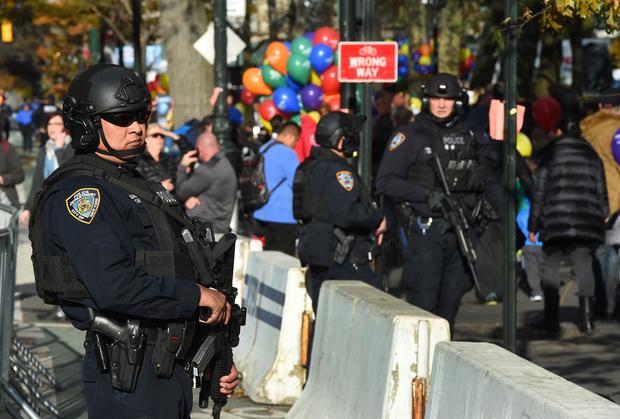 NEW YORK — Sand-filled sanitation trucks and police sharpshooters will mix with glittering floats and giant balloons at a Macy’s Thanksgiving Day Parade that comes in a year of terrible mass shootings and not even a month after a deadly truck attack in lower Manhattan.

New York City’s mayor and police brass have repeatedly stressed that layers of security, along with hundreds of officers, will be in place for one of the nation’s biggest outdoor holiday gatherings, and that visitors should not be deterred.

“We had a couple of tough months as a nation,” Police Commissioner James O’Neill said. “We won’t ever accept such acts of hate and cowardice as inevitable in our society.”

A posting last year in an English-language magazine of the Islamic State of Iraq and Syria (ISIS), which took credit for the Oct. 31 truck attack that killed eight people, mentioned the Thanksgiving parade as “an excellent target.”

The Department of Homeland Security and the FBI tell CBS News there are no specific threats or warnings surrounding the holiday. Officials in New York echoed that sentiment Wednesday.

“I want to assure the people that we swore to protect that anytime something happens anywhere in the world, the NYPD works with our law enforcement partners and studies it and we learn from it and it informs our decision making going forward,” O’Neill said.

NYPD Chief of Patrol Terence Monahan, who is in charge of parade security, told CBS News’ DeMarco Morgan that sanitation trucks will be “up and down” the parade route.

“Sand trucks, blocker vehicles — the entire route is secure from any vehicles entering it,” Monahan said.

He also said the NYPD is working with hotels and training staff on what to look for in wake of the deadly attack in Las Vegas.

“We have people at high posts,” Monahan said. “We have people — observation teams — there will be sniper teams in and around. We will have undercover assets in a lot of different buildings so there’s going to be a lot you can see out there, and a lot you won’t see out there that day covering every aspect.”

NYPD, along with federal and state agencies, will also monitor activity using state-of-the-art equipment that includes dozens of cameras set up through the city, CBS News’ Morgan reports.

“There’s probably not a spot in New York City that there isn’t some sort of camera that can be focused on you,” Monahan said.

In addition, officers with assault weapons and portable radiation detectors will walk among the crowds, and sharpshooters on rooftops will scan building windows and balconies for anything unusual.

New York officials are also asking the tens of thousands of spectators to be alert for anything suspicious.

“There will be a cop on every block,” said Monahan. “Go to that cop and say something.” 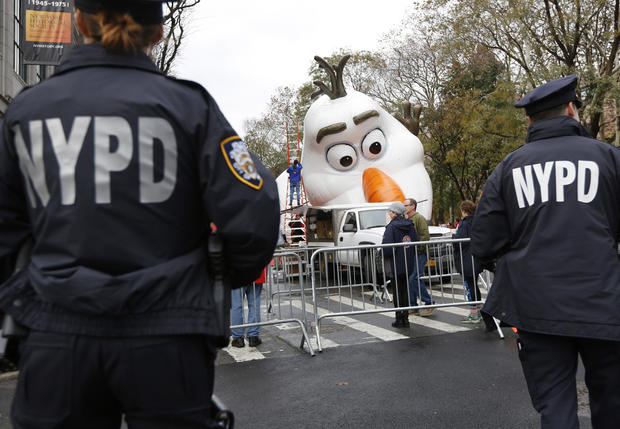 Police officers stand near the site where a large balloon of Olaf, from the animated film, “Frozen,” is being inflated for the Thanksgiving Day parade.

Tens of thousands of people were expected to head to Central Park on Wednesday night to watch the giant balloons take shape, CBS New York reports.

Spectators like the Pennebaker Family told CBS New York they were eager and excited to get a first look at the stars of the parade. It’s their first time to New York, and while mom and dad admit they did consider safety, they said they feel confident in the NYPD.

“It did cross our mind, but it didn’t prevent us from coming at all,” said Bo Pennebaker.

“We trust the New York Police Department completely, so we have no worries, no fears,” said Kathryn Pennebaker.

Some of the other security measures included police snipers on rooftops, officers on horseback and bomb-sniffing dogs.

“You know what, I feel safer. The more security the better,” one man said.

“I’ve seen a lot of policemen, so I feel really safe,” another added.

The 91st annual parade begins at 9 a.m. Thursday and will be broadcast live on NBC. Smokey Robinson, Jimmy Fallon, The Roots, Flo Rida and Wyclef Jean will be among the stars celebrating, along with performances from the casts of Broadway’s “Anastasia,” ”Dear Evan Hansen” and “SpongeBob SquarePants.” 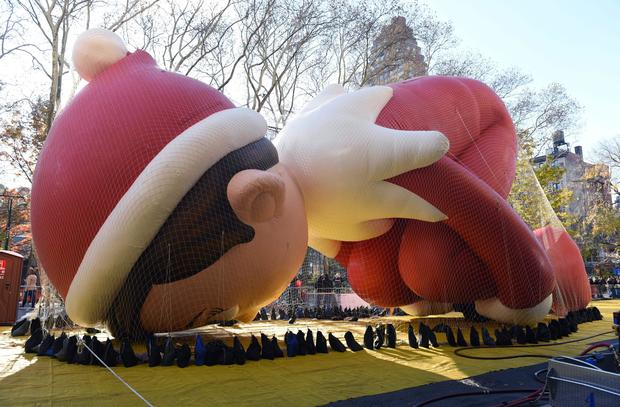 The Elf on the Shelf balloon lays on the ground during the Macy’s Parade balloon inflation on Wed., Nov. 22, 2017.

Police say they have been working on security for the parade since the moment last year’s parade ended. It’s a plan that got renewed attention after a terror attack in lower Manhattan on Oct. 31, when a man in a rented truck barreled onto a crowded bike path near the World Trade Center, killing eight.

Authorities said the 29-year-old suspect operated from a playbook put out by ISIS. Sayfullo Saipov, an Uzbek immigrant, was charged with federal terrorism offenses that could qualify him for the death penalty. According to a criminal complaint, he made statements about his allegiance to ISIS.

The first major event since the attack — the New York marathon, which drew tens of thousands of spectators and 50,000 runners from around the world — was held with no problems.

“We said right away New York’s response is to remain strong and resilient,” Mayor Bill de Blasio said. “We do not back down in the face of terror threats. The city is filled with resolve.”