And we’re there now.

“This is nuts,” his team said Friday when trying to wrap their brains around what’s next. This, Roberts explains, had him reassessing the overall portfolio risk for his clients in the face of a bull market that just keeps chugging along.

So, what is nuts, exactly? Well, as Roberts sees it, the “overbought, extended and complacent market” is heading toward a day of reckoning, and he used a tandem of charts to illustrate the excess.

First, this chart shows “the near-vertical price acceleration,” which is a hallmark of the kind of melt-up that takes place near the end of the cycle. He also pointed out that when markets get more than two standard deviations about their long-term moving average, reversions tend to hit stocks shortly thereafter.

Both factors are in play here:

On top of that, the put/call ratio, which shows the number of put options being bought on the S&P 500 SPX, -0.29% vs. the number of call options, is now hitting historical levels and showing an increasing appetite for risk. 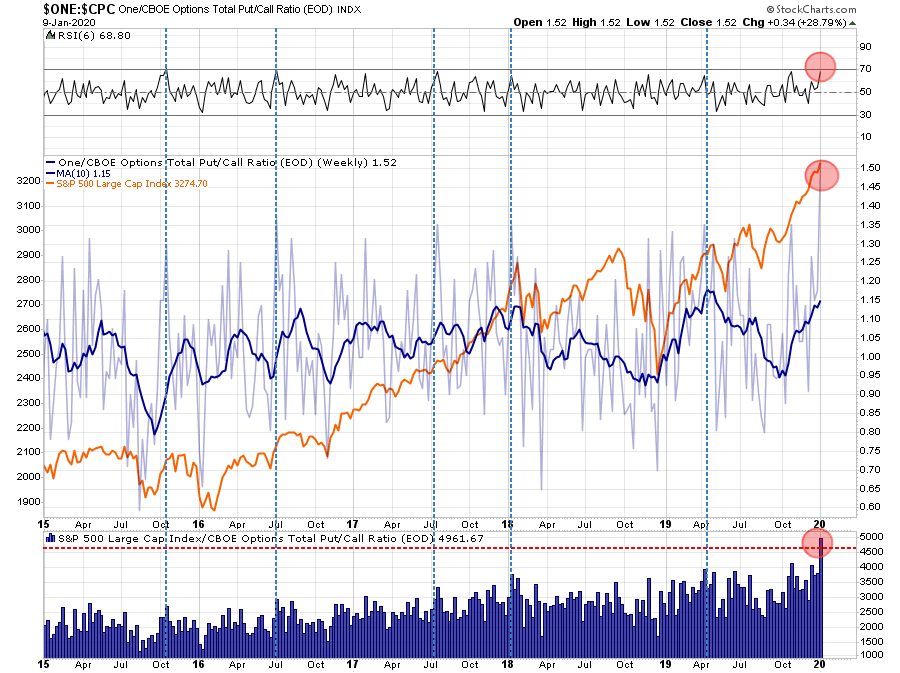 “While none of this means the market will ‘crash,’” Roberts said, “it does suggest the risk/reward ratio is not in favor of the bulls short-term.”

He is in agreement with fellow money manager Doug Kass, who recently raised alarms to clients with his ominous outlook.

“It is growing increasingly clear to me that global stock markets are in the process of making a speculative move (driven by global liquidity) that may even compare to the advances that culminated in the seminal market tops in the Fall of 1987 and in the Spring of 2000,” Kass said.

Nevertheless, Roberts says investors are getting swept up in the fear of missing out (FOMO) and ramping up their risk despite the fact that every valuation measure out there is topping out at extreme levels. “Yes, ‘this is nuts,’ which is why we took profits out of portfolios,” he said.

While the markets could certainly see a push higher in the short-term from the Fed’s ongoing liquidity injections, the gains for 2020 could very well be front-loaded for investors,” Roberts concluded. “Taking profits and reducing risks now may lead to a short-term underperformance in portfolios, but you will likely appreciate the reduced volatility if, and when, the current optimism fades.”