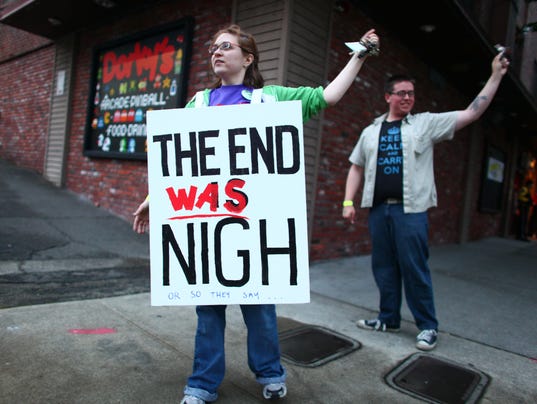 First the bad news: The world is going to end one day and there is nothing we can do about it. The good news: We probably have a billion years to enjoy ourselves here before that happens.

Humans have always been obsessed with The End. Since the dawn of civilization, people claiming to know when the big day is coming have stirred up trouble, sparked panics and started cults. The latest apocalyptic anxiety is being drumemd up by David Meade, a devout Christian who predicts the Rapture as foretold in the Book of Revelations is coming Saturday (what a bummer Doomsday couldn’t at least fall on a Monday).

There is no scientific evidence to support the theory espoused by the self-described “specialist in research and investigation.”

There are, however, several scenarios in which humans could be wiped out. And even if we manage to avoid all of those, the sun will die one day.

“A lot of people have written books about all the ways that the universe can get us,” said Richard Binzel, a professor of planetary sciences at the Massachusetts Institute of Technology. “Fortunately those are all very low probability. But, the one certainty is that the sun will not last forever.”

Sadly, one of the most likely ways we could be wiped is of our own making. If the world broke out into a massive nuclear war, not only would a horrifying number of people die in the blasts and resulting radiation, but some say it could trigger a “nuclear winter” that could finish off the survivors.

“If you have massive nuclear explosions, you can generate so much dust, debris and smoke in the upper atmosphere of the Earth that sunlight could be blocked for months if not years,” Binzel said. “So, the Earth goes incredibly cold and the long winter basically freezes out vegetation and freezes out life.”

Binzel said there is about a one-in-100-million chance of a giant asteroid slamming into the Earth in any given year.

“It just happened to be a bad year for the dinosaurs” when they were wiped out, Binzel said.

When a huge asteroid hits, it has an effect like nuclear winter. So much debris is stirred up that the sun can be blocked for many years.

This is one disaster we could do something about. With our current technology, we should spot an asteroid big enough to cause extinction “decades if not centuries” before it arrives, Binzel said. That could give us enough time to figure out how to divert it.

The potentially destructive consequences of rising global temperatures have been the subject of heated debate and political disputes for decades.

Rising sea levels, extreme weather events and lowered food production could lead to the death of millions, even billions of people, but Binzel doubts climate change would lead to our extinction.

Renowned astrophysicist Stephen Hawking has warned that over-population is another possible bullet that could lead to the demise of Earth as we know it. As of April 2017, the planet’s population is an estimated 7.5 billion, and the United Nations projects it will grow to 11.2 billion by the year 2100. (By comparison, the world’s population is estimated to have been about 370 million in the year 1350.)

At a speech in June at the Starmus science festival in Trondheim, Norway, Hawking said mankind’s only hope is to colonize other worlds.

“I am convinced that humans need to leave earth,” he told the crowd at the festival. “The Earth is becoming too small for us, our physical resources are being drained at an alarming rate . . . When we have reached similar crisis in or history there has usually been somewhere else to colonise. Columbus did it in 1492 when he discovered the new world. But now there is no new world. No Eutopia around the corner. We are running out of space.”

If a black hole was going to swallow up the Earth we would see it coming decades or centuries before it got here, but we wouldn’t be able to do anything about it, said David Aguilar, the author of Cosmic Catastrophes: Seven Ways to Destroy a Planet Like Earth.

But, Aguilar said the chances this happening are “infinitesimally small.”

If a nearby star exploded and went supernova, it could bombard Earth with X-ray and gamma radiation.

Aguilar said Betelgeuse, which is part of the Orion constellation, is one star that could go supernova, bathe the planet in radiation and “literally strip life off the surface of the planet.”

Diseases like the bubonic plague, smallpox and flu have sparked epidemics that killed tens of millions of people, but civilization has endured.

Today, with cities more massive than ever and the world interconnected by air travel, there are concerns that a new disease could quickly spread across the planet.

With viruses mutating more rapidly than ever and bacteria becoming increasingly resistant to antibiotics, public health experts believe the risk of a global pandemic is greater than ever before.

Many countries possess biological weapons that could have horrific consequences if unleashed.

New technology, such as the CRISPR-Cas9, makes it cheap and easy for non-state actors to modify or weaponize viruses and bacteria as well.

“With CRISPR, and our ability to genetically change and recombine bacteria together, we may be our own undoing,” Aguilar said. “Somebody comes along who is a rogue experiment and lets something loose on the planet and there’s virtually no stopping it.”

Hawking said that if we are ever contacted by aliens, “we should be wary of answering back.”

“Meeting an advanced civilization could be like Native Americans encountering Columbus — that didn’t turn out so well,” Hawking said.

Hawking, entrepreneur Elon Musk and Microsoft co-founder Bill Gates have all expressed concerns about what the rise of artificial intelligence could mean for the human race.

Musk worries AI could start World World III and Hawking worries “the development of full artificial intelligence could spell the end of the human race.”

“Once humans develop artificial intelligence, it will take off on its own and redesign itself at an ever-increasing rate,” Hawking told the BBC. “Humans, who are limited by slow biological evolution, couldn’t compete and would be superseded.”

Like nuclear winter or an asteroid impact, a gigantic volcanic eruption could spew enough particles into the atmosphere that it would block out the sun, cooling the planet and killing plant life.

“I was a member of the NASA Advisory Council on Planetary Defense which studied ways for NASA to defend the planet from asteroids and comets,” NASA aerospace engineer Brian Wilcox told the BBC. “I came to the conclusion during that study that the supervolcano threat is substantially greater than the asteroid or comet threat.” “

NASA scientists are currently very worried about the supervolcano underneath Yellowstone National Park and testing ways to prevent a possible eruption.

Even if we dodge all of the above scenarios, one day, in four or five billion years, our sun will run out of fuel. Life on Earth will end before that though.

As the sun dies it will grow hotter and global temperatures will rise to the point that our oceans will evaporate, Aguilar said.

“Eventually after a billion, billion-and-a-half years, the surface of this planet is probably going to be uninabitable,” he said. After that the sun will expand into a red giant, engulfing Mercury, Venus and possibly Earth.

Most people have a hard time accepting the inevitable end of the world.

“The idea of the end of humanity is just too horrific to entertain,” said pschyanalyst Robert Stolorow. People derive a sense of meaning from being a part of human history either through their decesnedents or their contributions. “But if human history is going to come to an end, that source of meaningfullness will disappear.”

There is always the hope we could colonize another planet. Aguilar said that when we look for a new home, it’s important to find a planet that is just the right age.

“Planets, like people have a golden part of their life, and then it’s all down hill from there,” Aguilar said. “We’re living in the golden age of life on Earth.”

Will the world end on Saturday?

World ending Saturday? Here are all the times the world was supposed to end, and didn’t

Elon Musk: Artificial intelligence battle ‘most likely cause’ of WWIII