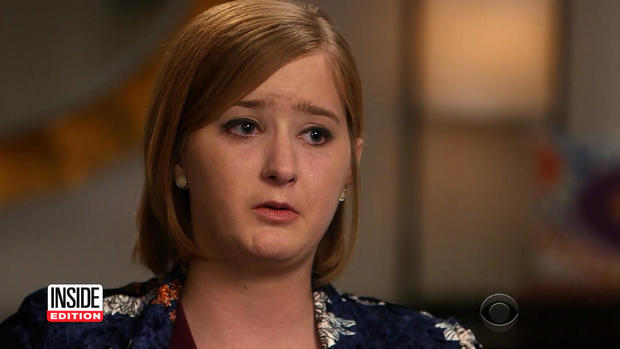 An ex-wife of Devin Patrick Kelley, the Texas gunman who killed 26 people in a church, said Friday in her first interview since the massacre that she lived in constant fear of him, and more information is coming to light about his actions in the weeks leading up to the shooting.

“He just had a lot of demons or hatred inside of him,” she told “Inside Edition.”

Inside Edition via CBS News

Kelley pleaded guilty in 2013 to hitting, choking, kicking and pulling her hair. The then-23-year-old Air Force airman also admitted to fracturing the skull of her young son. On Friday, she described the marriage as filled with abuse, and said she was once threatened over a speeding ticket.

The guilty plea earned Kelley a one-year sentence in a military prison, followed by a bad-conduct discharge.

She said he threatened to kill her and her whole family.

This week, the Air Force acknowledged that it failed to notify the FBI about the conviction, which would have barred Kelley from purchasing the firearms he used in the attack on the First Baptist Church in Sutherland Springs.

There will be a Sunday service of healing a block from the church at the local community center, and funerals have started for the 26 victims of the shooting. On Thursday, more than 500 people attended a private service at a San Antonio-area Air Force base for Scott and Karen Marshall, a husband and wife who both served in the military, said Randy Martin, spokesman for the 12th Flying Training Wing.

Eleven people remained hospitalized Friday with wounds from the shooting.

Less than a week before the Texas church massacre, Kelley showed up at a festival dressed in black and acted so strangely that people kept a close eye on him, two longtime parishioners said Friday.

Kelley “was completely distant and way out in thought,” recalled Judy Green. She and her husband said Kelley often exhibited troubling behavior.

At the fall festival held on Halloween night at the First Baptist Church, Kelley “didn’t even blink — he just stared,” she said.

Rod Green, a former law enforcement officer in Montana, said when he saw Kelley arrive in all black, he examined him closely to make sure he was not carrying a gun. The Greens both have licenses to carry handguns, and they are friends with Kelley’s in-laws.

If Kelley had been carrying a weapon, Green said, he would have escorted him away because of all the children there. Judy Green said she positioned herself to keep an eye on Kelley at all times.

“There was something wrong with the picture,” she said. “I was thinking forward, and that was what was scaring me.”

At a Christmas dinner one year, Kelley had “bragged about being armed,” Rod Green said.

Wilson County Sheriff Joe Tackitt has said the church pastor saw Kelley in the crowd at the festival but that the pastor did not witness any behavior that raised alarms.

Investigators have said Sunday’s shooting appeared to stem from a domestic dispute involving Kelley and his mother-in-law, and that he had sent threatening messages to her. The mother-in-law sometimes attended services at the church but was not present on Sunday. Kelley died of what appeared to be a self-inflicted gunshot wound after the massacre.

The Greens run a food pantry that offered this stricken Texas community another chance to mourn Friday as the charity resumed its weekly operations five days after the massacre at the church next door.

People crowded inside the By His Grace pantry, tearfully hugging and filling bags with donated bakery goods, groceries and used clothing.

The pantry’s director, Lula White, was among those killed. White was also the 71-year-old grandmother of the gunman’s wife.

As 68-year-old Brandy Johnson walked in, she flinched and she said she could “see Lu at the desk.” White “had a heart as big as Texas,” she said.

The Greens have operated the pantry for 11 years. She said she has slept little since Sunday, waking up screaming from nightmares. The couple, who were married at the church, were not at the service but later watched as worshippers were carried out in body bags.

Deana Cassel, who is 52 and a lung cancer patient, wiped away tears as she helped straighten piles of used clothing. She said volunteering at the pantry had given her a sense of purpose and a way to channel her grief about losing friends in the shooting.

“There’s a lot of poverty in this area, but people don’t only come here for something to eat. These people make them think they have someone in their life,” she said, gesturing toward the Greens.

Law enforcement officials have reopened the intersection where the First Baptist Church stands, but black mesh material was tied to the chain-link fence surrounding it. With the bullet-ridden church door open, a tall wooden cross could be seen at the altar.

At annual Veterans Day observances Saturday, the church victims with military backgrounds will receive a full military salute on the grounds of the community hall, said Alice Garcia, president of the unincorporated town’s community association.

“Everyone in the community is doing what they can, but honestly everyone feels so helpless,” 20-year-old Karyssa Calbert of neighboring Floresville, Texas, said at the hall.

Before the church is demolished, it will serve as a temporary memorial, said Rod Green, who also serves as the grounds steward for the church.

The building will be scrubbed down and whitewashed, and chairs will be placed inside — one to commemorate each of the dead. Late Friday afternoon, people in dust suits could be seen scrubbing the walkway leading to the front door.

Services will never take place there again, Rod Green said, explaining that the church plans to build a new structure on property it owns elsewhere. Services will be held Sunday at a nearby baseball field.

Pastor Frank Pomeroy told leaders of the Southern Baptist Convention earlier this week that it would be too painful to continue using First Baptist Church as a place of worship.