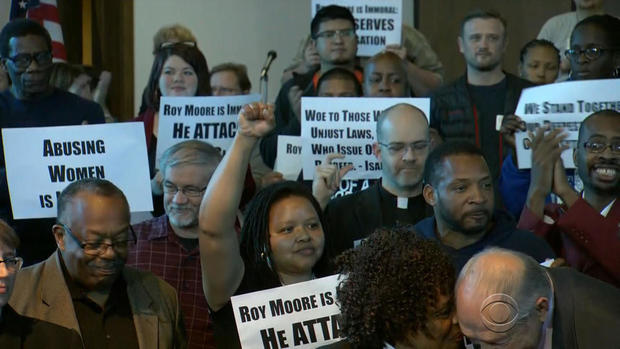 At the Tabernacle Baptist Church in Birmingham, evangelicals gathered to reject the idea that Roy Moore is their kind of Christian.

To them, his alleged unwanted advances or assaults against women only add to his unfitness.

“Even before these allegations made national headlines, it was clear that Moore’s policy agenda endangered the children of Alabama,” said Rev. William Barber. “Moore imagines the struggle for equality in America as a story of loss. Think about this.”

Those on stage pointed to a phrase Moore used Tuesday night at a revival meeting in Jackson, Alabama.

“They started creating new rights in 1965,” Moore said. “Today we’ve got a problem.”

The 1965 Voting Rights Act was designed to lift barriers erected by states and localities to block minority voters.

A woman introduced Moore on Thursday by saying “I present the hero of the day, Judge Roy Moore.”

Throughout the week, a different element of the envangelical ministry has championed Moore and demonized his critics.

“I say to them and I’ll quote the Ten Commandments, thou shall not bear false witness,” said one speaker.

Comments like that, as Rev. Laughton Hicks said Saturday, is the problem.

Moore hasn’t been seen in public since he fled from reporters questions on Thursday, but he has sent out his wife and legal staff to argue his case, which many in the Republican party leadership find unconvincing.