“We are going to press on. It’s OK to vote. It’s OK to fall short, if you do, for an idea that you believe in,” South Carolina Sen. Lindsey Graham told CNN’s Jake Tapper and Dana Bash at town hall debate in Washington.
But Democratic Sen. Bernie Sanders blasted the Republican approach, which must pass by an end-of-the-month deadline or go down to defeat as a “disaster,” and pushed for short-term fixes to Obamacare and his own long-term plan for a universal health care system.
The debate, also involving Democrat Amy Klobuchar and Graham’s partner in the health care drive, Bill Cassidy, came at a dramatic moment in the party’s latest effort to follow through on a promise to repeal the Affordable Care Act, made at successive elections over the last seven years.
Hours before the debate, a third Republican Senator, Susan Collins of Maine, said she could not support the bill, warning it did not do enough to protect people with pre-existing conditions and cut Medicaid too sharply. 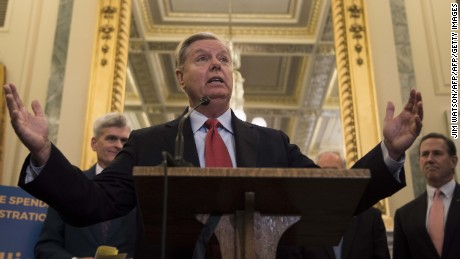