Uncategorized
July 11, 2019 3oliver
The South Korean soldier had seen another low-ranking conscript, deemed effeminate and suspected of being gay, being sexually abused, beaten and forced to drink from a toilet bowl by other soldiers.
But when Park — not his real name — tried to stop the abuse, he was instead subjected to it.
“Who are you to intervene in private business?” a more senior soldier asked him.
According to Park, he and the original victim were forced to have sex with each other while other soldiers taunted them. They were then further ostracized within the unit and by their superiors for being “perverted.” The abuse continued.
Eventually, they attempted to kill themselves. So did two other soldiers suffering similar bullying.
“We went to the boiler room to cut ourselves and banged our heads against the wall,” Park said. “All four of us were eventually taken to a psychiatric hospital.”
Park is one of dozens of South Korean soldiers who spoke anonymously to human rights NGO Amnesty International alleging abuse and discrimination against LGBT soldiers in South Korea’s military.
All South Korean men between the ages of 18 and 35 are currently required to perform at least 21 months of active-duty military service, and can face prison if they attempt to avoid conscription. Sexual orientation is not a valid reason to avoid conscription.
Roseann Rife, the report’s lead author and Amnesty’s research director for East Asia, said the military fosters anti-LGBT attitudes among soldiers, and that it has a ripple effect beyond the armed forces.
“The fact that nearly half of the population does go through military service really has an impact on broader society,” she said.” The military environment makes it okay to discriminate against LGBTI people, and so then it becomes sort of a tacit approval that can continue outside and in broader society.”
She said the government is aware of the issue and was moving slowly in the direction of greater protections, but that “more obviously needs to be done legally.”
South Korea’s Ministry of Defense did not respond to CNN’s request for comment.

While there has been progress made for LGBT rights in South Korean society at large, the military has been slow to catch up.
Despite a military directive passed in 2009 calling for greater protections for gay soldiers, LGBT conscripts still face suspicion, harassment and prosecution under Article 92-6 of the Military Criminal Act, which makes sexual activity between men punishable by up to two years in prison. 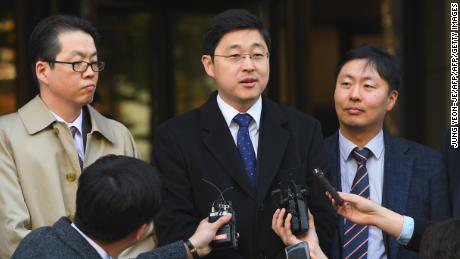 The law regards same-sex relations between soldiers as “disgraceful conduct,” akin to sexual assault. This clause has been upheld as constitutional by South Korean courts in the past, but is currently being challenged again in two ongoing cases by former conscripts.
In a submission to the United Nations on various human rights concerns, the government said the article “does not intend to impose criminal punishment by reason of one’s sexual orientation, but is set out to uphold military order and discipline, taking into account the nature of communal living in barracks.”
Gay sex is illegal in the military whether it happens on or off base, and regardless of whether one party is not an enlisted soldier. In 2017, dozens of men were arrested in what was described as a “gay witch-hunt,” with superiors using gay dating apps and inspections of soldiers’ phones and social media to track down LGBT conscripts. One captain was given a six month suspended prison sentence and dishonorably discharged following an investigation into his sexuality.
South Korea’s military is notorious for a culture of sometimes deadly hazing and bullying that remains pervasive despite attempts to address it. According to Amnesty, Article 92-6 is viewed by some soldiers as “tacit permission to target LGBTI people inside and outside the military.”
Paranoia about being outed as gay also creates a disincentive for soldiers to report abuse if they believe it is because of their sexual orientation. It also creates fear that their superiors may not take their reports seriously because they may feel the LGBT soldier “deserved it.”
Lee Seong-ju, a conscript from 2011 to 2012, told Amnesty that during his service he was “very scared.”
“I was very anxious,” Lee said. “Being together 24 hours a day for several months in the same space with those who were hostile toward me personally and my sexual orientation, made all people objects of fear for me.”

One conscript who spoke to Amnesty, called Jeram, said he was repeatedly groped and sexually harassed by higher-ranking soldiers in his unit. Jeram and other gay soldiers who spoke to the human rights group did not give a surname for fear of repercussions. 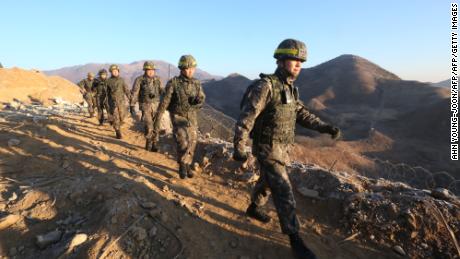 “I did not want to cause trouble, so I did not resist the sexual assaults at first,” he said. When he did attempt to push back, he was reassigned to punishment shifts, such as working at night and cleaning septic tanks.
Sleep-deprived and sick, Jeram was eventually hospitalized. During a mental health review, he said that a panelist who was not a medical professional castigated him for being “disobedient.”
“Even if I shoot you here, it will simply get covered up as a suspicious death and that will be it,” the soldier told Jeram. “Then, the compensation your family would receive will be even lower than for a military dog.”
Eventually he was discharged as “unfit for service” and his mother was pressured to sign an agreement not to sue the military for ill-treatment.
Another former soldier, Kim, who was in the military from 2010 to 2011, left the army due to mental health reasons, after months of being hounded for his sexuality. He told CNN that being discharged can have far reaching impacts.
“It makes me upset. In Korea if I try to get a job, I have to send in my resume. In the resume, they check whether you did your army service and if you left, what happened,” he said. “But if you had a some sort of issue in the army, people think you had a problem. So it’s not good for getting a job.”
Kim was harassed by fellow soldiers who suspected he was gay. They would grab him and attempt to kiss him, especially when he spoke on the phone with friends. When he sought help from officers, he himself was investigated, forced to give up his social media passwords and outed within his unit and to his family.
“I had to call my mother and come out to her,” Kim said. “Because if I didn’t, they were going to call my parents and tell them that I was gay.”
For many conscripts, their time in the military is something to endure and put behind them, but Kim’s experience was all the worse because he actually enjoyed being a soldier.
“I really wanted to stay longer. I had already spent a year,” he said. “I was good at shooting guns, I never failed any training. So I was really proud of myself. But all the things had changed just because I’m gay.”
Kim said he felt planned to move abroad in the future.
“I did all the duties for my country but it feels like they ditched me,” he said. “Feels like no reason to stay here longer.”

South Korea justifies its broad conscription laws on the grounds that it’s still technically at war with North Korea. In 1953 the two countries signed an armistice but not a peace treaty.
However, in recent years, the military service law has come under increasing scrutiny.
There have been complaints that it’s undercutting some of the country’s premiere cultural exports, forcing top musicians, actors and sportsmen to put their careers on pause to serve.
Sometimes it curtails their ambition right at the height of their fame, unless they achieve a level of success — such as winning an Olympic gold medal — that the government issues a rare waiver.
Last year, the country’s top court ruled that conscientious objectors could not be criminally punished for their beliefs, ending the country’s decades-long position as the world’s leading jailer of those who refuse to join the armed forces. The exemption is confined to those whose “religious faith which forbids bearing arms,” and they will still have to perform alternative service.
For the vast majority of South Korean men however, there is still no way to avoid the military. While many men do so willingly out of a sense of patriotism or adventure, and enjoy their time in the military, for others it can be a miserable 21 months.
Most at risk are trans individuals whose official identification cards give their gender as male. Trans women are classified by the military having a “gender identity disorder,” and may be required to serve as men.
In the past, according to Amnesty, the Military Manpower Administration, which oversees conscription, has charged several trans women with evasion of military service, claiming they are using gender identity as an excuse.
Other women have said they faced pressure to undergo invasive and irreversible surgery, including testicle removal and “extremely visible” gender confirmation treatments, in order to receive an exemption from military service.
Edhi Park, a transgender woman, was told to act more like a man during her military service. She was conscripted in 2007 and told Amnesty she was ordered to lower her voice and walk more “masculine” during training.
“A soldier joked around and said, ‘Let me insert this in you’ while showing me an umbrella,” she said. “I don’t know why I had to be treated this way.”