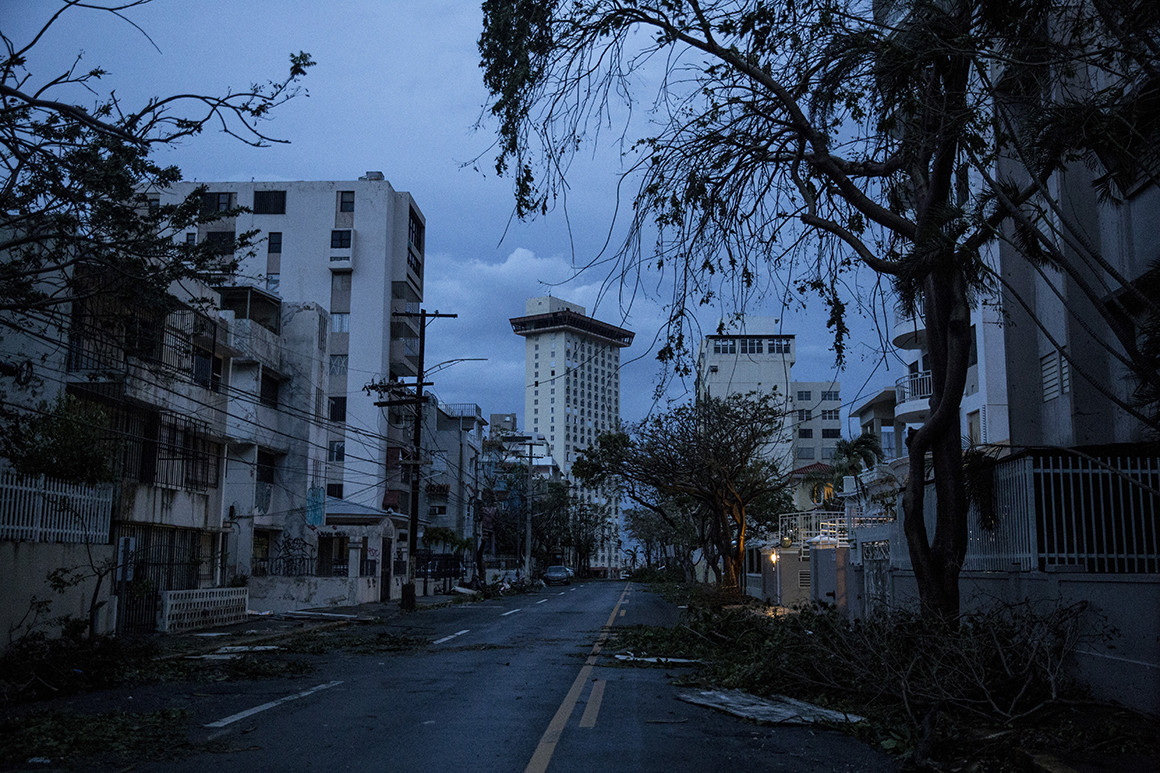 SAN JUAN — As Puerto Rico slips deeper into what many call a humanitarian crisis following Hurricane Maria, the island is primed for a mass exodus of what could be 1 million people — a sizable number of whom are expected to settle in Florida, the nation’s biggest swing state.

That could well prove to be a boon to Democrats in a state which the past four top-of-the-ticket races have been decided by about a percentage point.

“It’s going to mean a lot more people voting Democrat in Florida,” Marco Rigau, president of the San Juan municipal assembly, told POLITICO Wednesday, a week ahead of President Donald Trump’s scheduled visit to the commonwealth. “Puerto Ricans don’t like President Trump. When he shows on Tuesday, he’ll say ‘The Puerto Ricans love me’ because people won’t be picketing. But he has no idea.”

Rigau was speaking on the tarmac of Puerto Rico’s Isla Grande Airport, where Miami Beach Mayor Philip Levine, a likely Democratic candidate for Florida governor next year, was delivering 7,000 pounds of supplies a week after Hurricane Maria knocked out power and crippled roads across the island. The relief mission underscored how Florida Democrats like Levine are trying to fashion themselves as the party of solutions while portraying Republicans, led by Trump, as feckless. (A POLITICO reporter was one of two journalists invited to accompany Levine on the trip.)

Local Republicans clearly hear the criticism. Just hours after Levine landed in San Juan and met with its mayor, who hugged and praised him, Florida Gov. Rick Scott — a top Trump surrogate — announced he would travel to Puerto Rico on Thursday to help with relief efforts at the invitation of Puerto Rico’s governor, Ricardo Rosselló.

Scott himself had been facing Democratic calls to do more in Maria’s aftermath. He leaves office next year due to term limits and is considering a bid against Sen. Bill Nelson, a Democrat who might join a Florida congressional delegation trip to the island on Friday.

Scott’s decision to go to Puerto Rico came as the White House public relations apparatus sought to stem growing criticism that Trump has not done enough to respond, even as he posts Twitter messages about NFL players refusing to stand for the national anthem.

White House officials pointed out Wednesday that Puerto Rico’s governor had said Trump had been “phenomenal in this situation,” although Rosselló and others have repeatedly called for more resources and less red tape. They also need a distribution network. The port has loads of supplies baking in unopened shipping containers that haven’t been moved due to a lack of trucks or passable roads.

The intense awareness of Puerto Rican affairs in Florida highlights how crucial the populace is in the Sunshine State, which has more than 1 million people with roots on the island — about the same number as New York. Concentrated largely around Orlando, Puerto Ricans increasingly have become a left-leaning counterweight to Republican-performing Cuban-Americans in the Miami area.

But once in Florida, Puerto Rican voters have proven tough to motivate for the Democratic Party, despite being generally more aligned with liberals than conservatives. Many are registered as independent, no party affiliation voters — and not as Democrats — because they “have seen the failure of partisan politics back home, and that’s why the Puerto Rican vote in Florida is so abysmally low,” said Jorge Bonilla, a Central Florida Republican and Puerto Rican activist.

Bonilla acknowledged Democrats could stand to gain more than Republicans after more Puerto Ricans move here, if the Maria response is botched. But he said Republican Sen. Marco Rubio’s understanding of the crisis, and his decision to raise the alarm about conditions in Puerto Rico, have started to endear him to the community at large.

Rubio said earlier this week he wanted to make sure that post-Maria Puerto Rico didn’t become a Hurricane “Katrina-style” disaster. Progressives have started to call Maria “Trump’s Katrina” and compared conditions at the San Juan airport to the Superdome during the 2005 storm that wrecked New Orleans and damaged President George W. Bush’s approval ratings.

At Isla Grande Airport on Wednesday, Levine stopped short of comparing the two GOP presidents’ responses to the two hurricanes. But he said more needed to be done by the U.S. government and, specifically, by the military.

“If we were attacked by a foreign power, our military would treat this like a war zone. And we need to declare war on this devastation,” Levine said. “Trump is a bad CEO, and it shows.”

San Juan’s mayor, Carmen Yulín Cruz, was more circumspect than Levine when it came to rating the president’s performance. She said Levine “had answered our S.O.S.” but said the call still hasn’t been fully heeded by the federal government. Behind the scenes, there’s also tension between Cruz and the governor, Rosselló, whom she is considering challenging in his reelection.

Asked what message she would like Trump to hear, Cruz quoted John 13:27, where Jesus tells Judas: “What you are going to do, do quickly.”

Cruz estimated that as many as 30 percent of the island’s 3.4 million residents could flee Puerto Rico if it remains in such bad shape. And many will show up in Florida, where the culture, climate and distance are closer to Puerto Rico than New York’s.

David Efron, an attorney who splits his time between Miami and San Juan and traveled with Levine on Wednesday, said the political consequences could be steep for Trump if there’s a mass exodus.

“Trump should be doing everything in his power to rebuild Puerto Rico and keep people here. Otherwise they’re coming to Florida,” he said, “and they’re not voting for Trump.”