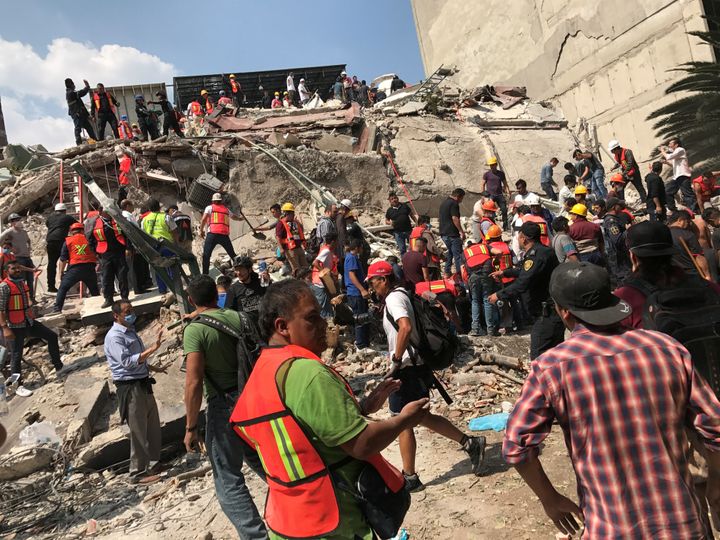 MEXICO CITY (Reuters) – Rescue crews and ordinary citizens searched through rubble for survivors as night fell on Tuesday on battered cities in central Mexico, including the capital, where the death toll from a major earthquake grew to at least 216, the nation’s civil protection agency said.

The magnitude 7.1 quake toppled dozens of buildings, broke gas mains and sparked fires less than two weeks after another powerful quake killed at least 98 people in southern Mexico. It also hit just hours after emergency drills marked the anniversary of a temblor that killed thousands in 1985.

Millions of people fled into the streets, where they weathered the violent shaking and desperately sought word about the welfare of family and friends.

Emergency personnel in Mexico City, a metropolitan region of about 20 million people, searched frantically with picks and shovels for survivors beneath the rubble of what the sprawling city’s mayor calculated to be as many as 44 collapsed buildings, including at least one primary school.

Mexican President Enrique Peña Nieto said late on Tuesday more than 20 children and two adults had been found dead at the school, Colegio Enrique Rebsamen, in the neighborhood of Coapa. Another 30 children and 12 adults were missing, he said.

Emergency personnel and equipment were being deployed across affected areas so that “throughout the night we can continue aiding the population and eventually find people beneath the rubble,” Peña Nieto said in a video posted on Facebook earlier on Tuesday evening.

Rescue workers and soldiers toiled around collapsed buildings where heat-sensing equipment suggested survivors could still be trapped. Bystanders joined in where they could, clearing debris with their bare hands or whatever tools they could find nearby.

“My wife is there,” said Juan Jesus Garcia, 33, choking back tears outside one building in Mexico City.

“I haven’t been able to communicate with her. She is not answering, and now they are telling us we have to turn off our cellphones because there is a gas leak.”

The death toll in Mexico City surged to 117 people, Luis Felipe Puente, the head of the civil protection agency, wrote in a post on Twitter. The earthquake struck on the 32nd anniversary of a temblor that killed thousands in the capital.

The state of Morelos, just south of Mexico City, was also hard hit with 55 killed, Puente said. At least 12 people were killed in the neighboring state of Mexico, and three deaths were reported in the state of Guerrero on the Pacific coast.

At least 39 deaths had been counted in the central state of Puebla, also to the south, where the U.S. Geological Survey (USGS) located the quake’s epicenter.

As many as 4.6 million homes, businesses and other facilities had lost electricity, according to national power company Comisión Federal de Electricidad. Most of them were in the greater Mexico City area and in the states of Guerrero, Morelos, Puebla, Oaxaca, and Tlaxcala.

In the capital, ambulances and fire engines confronted gridlock as millions of workers tried to get home, many of them after participating in annual readiness drills that commemorate the previous disaster on this date in 1985.

Much of the country was also shaken when an 8.1 magnitude quake, the strongest in more than eight decades, struck southern Mexico on Sept. 7, killing at least 98 people.

Earthquakes of magnitude 7 or above are regarded as major and are capable of causing widespread heavy damage. Another 11 aftershocks were registered after the initial quake at around lunchtime on Tuesday, the most powerful of which measured 4.9, according to the USGS.

In addition to the school, a supermarket and a factory collapsed in the capital. Much of the damage was in the fashionable Condesa and Roma districts near the city center.

On Twitter, relatives posted pleas for news of family members. At least one survivor was pulled from a collapsed building in Condesa and another was rescued from a six-story apartment building nearby.

Mexican media showed images of desperate locals forming human chains in search of people still trapped in collapsed buildings after nightfall. With power out in much of the city, the work was carried out in the dark or with flashlights and generators.

In Obrera, a central neighborhood in Mexico City, people applauded when rescuers managed to retrieve four people alive, with cheers of “si se puede,” or “yes we can,” ringing out.

Volunteers continued arriving throughout the night, following calls from the civil protection agency, the Red Cross and firefighters.

In Puebla, university student Jevon Minto, 24, said he had just arrived at class when he felt the shaking. “We were seated when the place started shaking real, real hard … You can literally feel the fear and the panic in this city.”

Banker Jesus Gonzalez Hernandez, 55, said office lamps and furniture swayed when the tremor began. He and colleagues rushed to evacuate. “But while exiting down the stairs, the walls were coming apart,” said Gonzalez Hernandez, who fractured his ankle in the chaos.

Mexican stocks and the peso currency dropped on news of the earthquake and Mexico’s stock exchange suspended trading.

At the same time as the earthquake, Mexico’s Popocatepetl volcano had a small eruption. A church collapsed during mass, killing 15 people, in Atzitzihuacan on the slopes of the volcano, Puebla Governor Jose Antonio Gali said.

U.S. President Donald Trump said on Twitter: “God bless the people of Mexico City. We are with you and will be there for you.”

For a graphic on earthquake strikes central Mexico, click: here