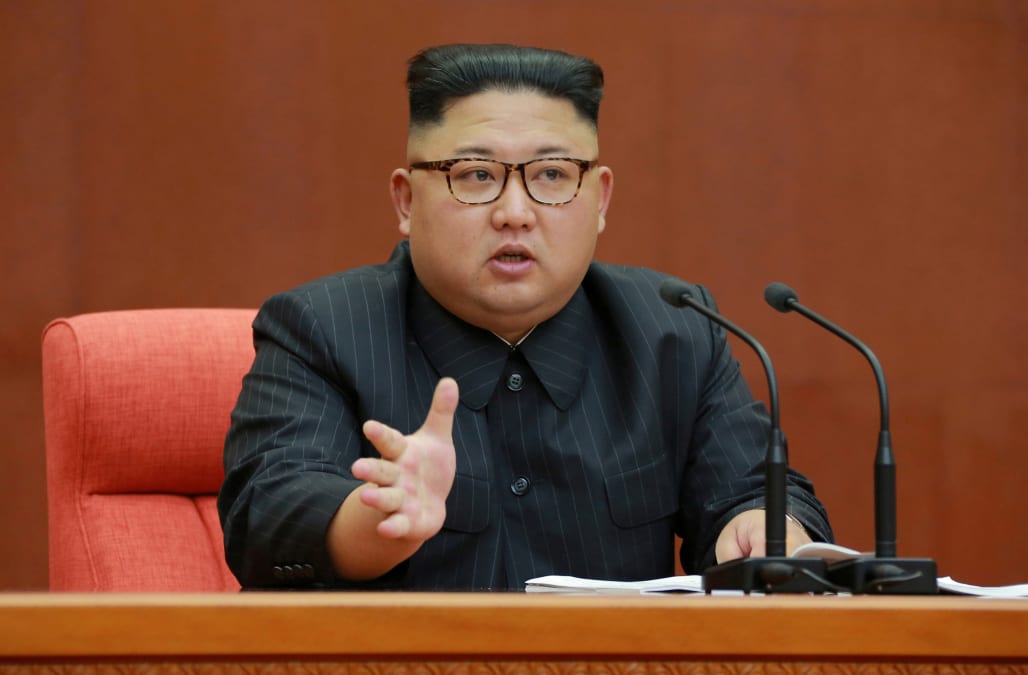 North Korea issued another threat of nuclear annihilation against the U.S. on Thursday, vowing to unleash an “unimaginable strike at an unimaginable time.”

“The U.S. is running amok by introducing under our nose the targets we have set as primary ones,” North Korean state news agency KCNA said in a statement. “The U.S. should expect that it would face unimaginable strike at an unimaginable time.”

“The rabid man in the White House … will first face the immense volley of nuclear fire if he hopes to settle (this) confrontation with nukes,” KCNA said.

Trump has engaged in a heated war of words with the rogue nation since taking office.

RELATED: Countdown to a standoff: A timeline of tension with North Korea

Countdown to a standoff: A timeline of tension with North Korea

After four years in power, Kim Jong Un says his country can produce a hydrogen bomb, the first step toward a nuclear weapon that could target the United States. The nation tests a device, but Western experts are not convinced it is a genuine hydrogen bomb.

North Korea sends up a satellite. The United States calls this a disguised test of an engine powerful enough to launch an ICBM.

North Korea claims it can miniaturize a nuclear device to fit onto a missile.

North Korea says it has successfully tested an intermediate range ballistic missile (IRBM), with a range of 2,000 to 3,400 miles. Kim Jong Un claims the country can now attack “Americans in the Pacific operation theater,” including the territory of Guam.

North Korea conducts its fifth and largest nuclear test on the anniversary of the country’s founding. It says it has mastered the ability to mount a warhead on a ballistic missile.

North Korea reveals a new ICBM design, displaying the missiles at a military parade to mark the birthday of founding leader Kim Il Sung. Within three months, the missiles are tested.

North Korea tests an ICBM for the first time, saying it can launch a missile that can reach the continental United States. The missile, Hwasong-14, is tested again three weeks later, this time in a night launch.

North Korea’s army threatens to fire missiles towards Guam in an “enveloping fire.” The message comes hours after President Donald Trump warns Pyongyang that it will be “met with fire and fury” if North Korea does not stop threatening the United States.

North Korea publishes photographs of Kim beside a diagram of what appears to be a new ICBM. Weapons experts say it will be more powerful than the missiles tested by Pyongyang in July, and could have Washington and New York within range.

North Korea fires an intermediate range missile over northern Japan, prompting warnings to residents to take cover. The missile falls into the Pacific Ocean, but sharply raises tensions in the region.

North Korea stepped up its missile tests and threatened to bomb the U.S. territory of Guam as Trump repeatedly vowed military actions following intelligence assessments that the country produced a miniaturized nuclear warhead.

In recent months, North Korea has tested what it said were a thermonuclear weapons and intercontinental missiles.

It has also launched two midrange missiles over Japan while threatening to fire similar weapons at Guam.

North Korea’s deputy U.N. ambassador, Kim In Ryong, said Monday at the United Nations that the situation on the Korean Peninsula had “reached the touch-and-go point and a nuclear war may break out any moment.”

Trump is preparing for a 12-day tour of Asia next month and the White House is debating whether or not the President will visit the demilitarized zone separating North and South Korea.

Some administration officials fear a visit will stoke tensions, while others fear for the President’s safety, according to a Washington Post report.

Officials in Seoul denied reports Thursday that South Korea president Moon Jae-in is opposed to Trump’s visit to the DMZ.