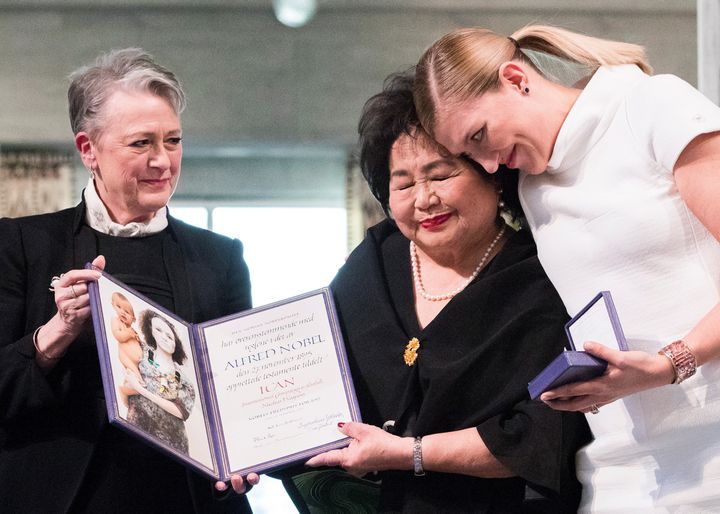 Total nuclear destruction is “only one impulsive tantrum away,” this year’s Noble Peace Prize winner warned while accepting the award for an international anti-nuclear weapons campaign.

“The threat is real. We have avoided nuclear war not through prudent leadership but good fortune. Sooner or later, if we fail to act, our luck will run out,” Beatrice Fihn, executive director of the International Campaign to Abolish Nuclear Weapons (ICAN), said during a ceremony in Oslo on Sunday.

“The risk for nuclear weapons use is even greater today than at the end of the Cold War. But unlike the Cold War, today we face many more nuclear armed states, terrorists and cyber warfare,” she said. “A moment of panic or carelessness, a misconstrued comment or bruised ego, could easily lead us unavoidably to the destruction of entire cities.”

ICAN has since its 2007 establishment worked to draw attention to the catastrophic consequences of nuclear weapons and promote a treaty-based prohibition of them, according to the Nobel Prize’s website.

During a news conference on Saturday about ICAN’s work, Fihn included mention of North Korean leader Kim Jong-un and President Donald Trump, who in recent months have engaged in mutual verbal threats and name calling over Pyonyang’s nuclear weapons program.

On Sunday, Fihn accepted the prestigious award alongside atomic bomb survivor Setsuko Thurlow, who recalled climbing out of rubble toward the light after the U.S. dropped an atomic bomb on her city of Hiroshima, Japan, in 1945.

Thurlow, while recalling that life or death moment at the age of 13, urged countries to sign the international Treaty on the Prohibition of Nuclear Weapons.

“Our light now is the ban treaty,” Thurlow said, according to the AP. “I repeat those words that I heard called to me in the ruins of Hiroshima: ‘Don’t give up. Keep pushing. See the light? Crawl toward it.’”

In a speech on Sunday, Berit Reiss-Andersen, chair of the Norwegian Nobel Committee, stressed that the nuclear weapons that instantly killed at least 140,000 people in Hiroshima and Nagasaki ― and later many more by radiation ― are not as destructive as the ones we have today.

“A nuclear war could kill millions of people, dramatically alter the climate and the environment for much of the planet, and destabilize societies in a way never before seen by humanity. The notion of a limited nuclear war is an illusion,” she said.

The Treaty on the Prohibition of Nuclear Weapons has been signed by 56 countries, none of which have nuclear weapons. It has been ratified by just three. In order for it to become a binding agreement, it needs ratification by 50 countries, Reiss-Andersen said.