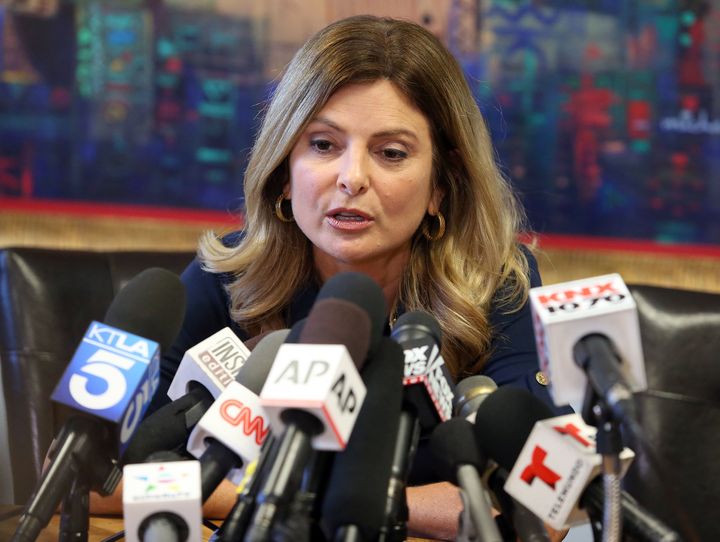 Last Thursday, after the New York Times reported on decades of sexual misconduct allegations against Hollywood mogul Harvey Weinstein, attorney Lisa Bloom emailed the Weinstein Company’s board of directors about her client. “This is the worst day,” she wrote in an email provided to HuffPost by a recipient.

Bloom, who criticized the “largely false and defamatory” story, is known for defending women against a number of high-profile alleged harassers, including Bill O’Reilly and Bill Cosby. Bloom was an adviser on Weinstein’s legal team when she sent the email, but resigned Saturday as sexual harassment allegations escalated.

“This is the worst day.

This is the day the New York Times came out with a largely false and defamatory piece, in a major violation of journalistic ethics, giving only two days to respond to dozens of allegations, and then refusing to include information about eyewitnesses and documents negating many of the claims.

Tomorrow there will be more and different reporting, highlighting inaccuracies, including photos of several of the accusers in very friendly poses with Harvey after his alleged misconduct.

On Monday Harvey’s defamation lawsuit will be filed where the New York Times will be forced to answer: what was the rush? Why was information favorable to Harvey not included? Why weren’t accusers’ inconsistencies not included? And much more.

In the coming days this thing will shake down in one direction or another.

This is not the time to make a decision about Harvey. It is the time for Harvey to take a break, get some help, and lay low. The board should make major decisions after full information, not based on one very flawed hit piece.”

But on Friday, the day after Bloom told the board that “different reporting” featuring “photos of several of the accusers in very friendly poses with Harvey” would be forthcoming, Bloom told HuffPost that her presence on Weinstein’s legal team could be good for his accusers.

If she weren’t working for Weinstein, she said, it’s possible his legal team might attack his accusers, undermine “their credibility and release negative stories about them to the press.” This would “scare other women from coming forward, which has always been the way it’s been done before,” she said. “Would they be doing that? I don’t know, but that is the way attorneys handle these things and that’s not the way this is being handled.”

Despite the email to the board, HuffPost is not aware of any such stories being published.

In an email on Monday, Bloom told HuffPost, “There was absolutely no plan to go after accusers. What I meant [in the email] was that there is going to be a lot more coming because every media outlet in the world was reaching out to us with information and yes, photos.”

“It was a whirlwind. I felt strongly that it was not the time to make a decision. It was time for Harvey to take a break, get help. The company should do an independent investigation and then make a decision. Which is what I have advocated in every case, whichever side I’ve been on. Fairness.

I did know that there were photos that some news organizations were considering running (or perhaps had already run), along with much more material. I did not release any photos to anyone and I didn’t plan any kind of strategy of releasing photos.

It’s astonishing to me that advocating for an investigation to get to the bottom of everything would be controversial.

I said publicly we weren’t going after accusers. Harvey said that too. When asked in interviews, I said only that they deserved respect. If I had this nefarious plan, it would have been easy to execute ― just hit send. Please. This is an insult to me and my life’s work for 31 years.”

The Times reported on Saturday that Lance Maerov, a board member of Weinstein’s company, wrote in an email that “publishing pictures of victims in friendly poses with Harvey will backfire as it suggests they are exculpatory or negate any harm done to them through alleged actions.”

Bloom told HuffPost over the phone on Sunday, “I can’t be entirely sure why certain board members are choosing to publicly attack me. One theory is that everybody is going through a very stressful time and they have decided to choose me as their punching bag. Another theory would be that I have encouraged Harvey to apologize for [his actions] and they would have prefered I would not [have.]”

Bloom sent a second email to the board, which was obtained by HuffPost.

“Thank you and hello.

Agree: Harvey needs help and he has committed to getting it. He has apologized profusely and sincerely. He has asked to be judged by his actions going forward. He has hired me to smack him around, which I have been doing.

I have a great deal of experience in this field of both sexual harassment and crisis management and welcome the opportunity to give input in a calm, dispassionate manner. You are free to accept or reject my advice.

I do know what while Harvey clearly has a pattern of bad behavior, the New York Times refused to take into account eyewitness statements that disproved some of the more serious allegations, significant inconsistencies in some of the accusers’ stories, and documents that bear upon some of the stories. He was given only two days to respond to dozens of allegations spanning 30 years. I am sure his own company wants to approach this in a manner that is more fair. Bring in an outside investigator. Find out what really happened. Then decide appropriate consequences. And give this time to see whether he truly can get his anger under control.

There are no allegations in the last two years, and certainly none in the last year since I have been working with him.

I am available today in NYC if anyone wants to talk.”

After the initial New York Times article was published on Thursday, three of the Weinstein Company’s nine board members resigned.

The television journalist Lauren Sivan told HuffPost on Friday that in 2007, Weinstein trapped her in a restaurant hallway and masturbated in front of her into a potted plant.

On Sunday night, Weinstein was fired from the company he co-founded. In a statement, four of the remaining board members said they had made the decision “In light of new information about misconduct by Harvey Weinstein that has emerged in the past few days.”