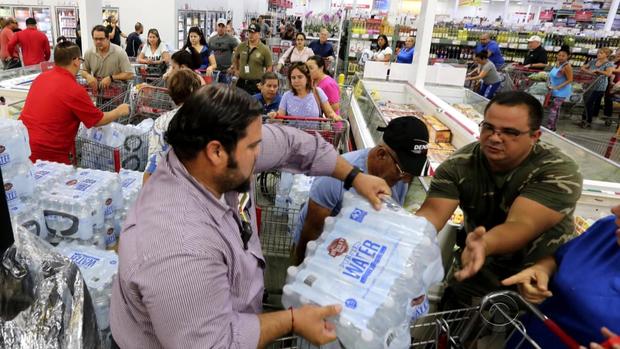 President Trump declared an emergency in Florida, Puerto Rico and the U.S. Virgin Islands — all threatened by Hurricane Irma, a Category 5 storm that has already turned deadly on the islands of the Caribbean.

The National Hurricane Center says chances have grown for a direct hit on Florida — possibly as soon as this weekend.

In South Florida, mandatory evacuations began Wednesday. Many Floridians have been left scrambling to find supplies to board up homes and businesses in the Florida Keys, CBS News correspondent Manuel Bojorquez reports.

“We’ve sold stuff before we can even get it off the truck,” said Daniel Michael, who manages a hardware store his parents have owned in Key Largo for more than 40 years. “Everybody is just kind of crazily going everywhere. We’re out of all our inventory and there’s no gas left.”

Many Floridians have been left scrambling to buy water and find supplies to board up homes and businesses.

The major concern is storm surge. The islands average about 6 feet above sea level. The surge from Hurricane Irma has the potential to be more than nine feet high.

Florida Gov. Rick Scott traveled to the Keys on Wednesday.

“Every Floridian should take this seriously and be aggressive to protect their family,” Scott said.

The governor estimates 25,000 people in the state have already evacuated. Elizabeth Prieto is heading for higher ground for the first time in decades. 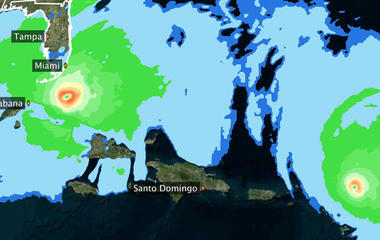 What areas will be hit hardest by Hurricane Irma?

CBS News weather producer David Parkinson joins CBSN with a look at Hurricane Irma’s projected path and which areas may be affected the most.

“I’m scared,” Prieto said. “Category 5, never been through one. Been through a four, but never a five, and I don’t want to be here.”

Hospitals in the Keys, like Mariners, are evacuating, too. Critical care patients have been moved north, said CEO Rick Freeburg.

Gas is one of the prized commodities as people brace for Irma, reports CBS News correspondent Mark Strassmann. On Miami Beach, people have been urged to leave.

If Irma swamps Miami Beach, the city’s public works assistant director, Roy Coley, has to drain it. Coley inspected and flushed all 34 pumping stations on Wednesday. He has 30 more temporary pumps on standby.

“If you get a Category 5 direct hit on this city, there’s nothing our pumps could do to prevent flooding,” Coley said. “All our pumps are gonna be capable of, is when the storm is over, to recover quickly.” 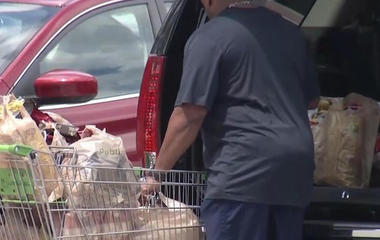 “They need to listen,” Levine said. “No one needs to be a superhero here. We want them off the island.”

Late Wednesday, Miami-Dade County Mayor Carlos Gimenez issued mandatory evacuation for zones A and B and the barrier islands. A map of evacuation zones can be downloaded here.

The mayor explains that no one will force residents from their home, but if Hurricane Irma hits fire rescue and police may not be able to reach people in case of an emergency.

In eastern Broward County, mandatory evacuations go into effect at noon on Thursday. South Floridians stampeded for food and water. A cop kept order at a gas station, where some drivers waited 90 minutes.

“It’s terrifying,” Eliza Arnold said. “I mean, everything that just happened in Houston. It’s just scary. And I hope everyone takes the necessary precautions and is safe.”

The National Hurricane Center (NHC) released its 8 p.m. advisory Wednesday to report that the eye is passing about 50 miles north of Puerto Rico.

Hurricane Irma’s winds are sustained at 185 mph and the storm is moving toward the west-northwest at 16 mph.

Irma, the most powerful storm ever recorded in the Atlantic, formed on the heels of Hurricane Harvey, which devastated the southeastern coast of Texas and parts of Louisiana with days of torrential rain.