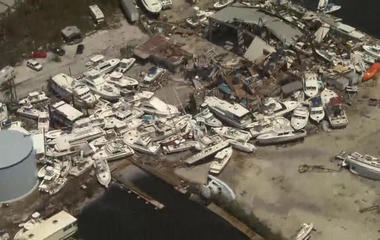 Hurricane Irma’s destruction in the Florida Keys — population 75,000 — is staggering.

FEMA reported on Tuesday that Hurricane Irma destroyed a quarter of houses in the Keys. Nearly two-thirds have major damage.

President Trump is going to Florida Thursday to see for himself what Irma did to the state.

From above, a wider picture of the devastation in the Keys

FEMA says Irma destroyed 25 percent of homes in the Florida Keys, and 65 percent are heavily damaged. There is almost no power and no water. By a…

The storm is blamed for at least six deaths in Florida, three in Georgia and four in South Carolina.

In Ramrod Key, just east of where Irma first made landfall Sunday morning, it is miles of destruction, CBS News’ Elaine Quijano reports.

House after house, block after block, roofs are torn off, boats are on the road, and RVs are mangled in trees.

After Irma’s path of destruction cut through the Keys, residents in Islamorada who didn’t evacuate came out to look at the damage.

“This was a big part of my life. For 15 years, I’ve lived here and it’s just, you know, in one moment it’s gone. It’s hard to figure it out where you are going to start over,” said one resident.

The Florida Keys stretch for 112 miles. But, citing safety concerns, officials are only allowing residents who evacuated to return to just the first 33 miles.

Those who did evacuate are trying to get in. At a checkpoint near the Upper Keys, residents slept in their cars and waited for hours just to see if they still have a home. 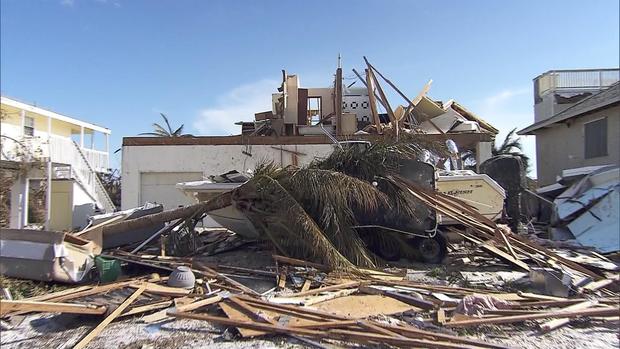 The destruction in the Florida Keys after Hurricane Irma.

“I have water, I have food, I have dogs, and I can’t get to my house!” one homeowner said to officers at the checkpoint. “Twenty miles away!”

Sam Nuccio drove down to check on his house in Big Pine Key, but was told to turn around.

“We can’t get in the way of emergency vehicles and cleanup crews and everything like that,” Nuccio said. “I believe that’s what’s going on.” 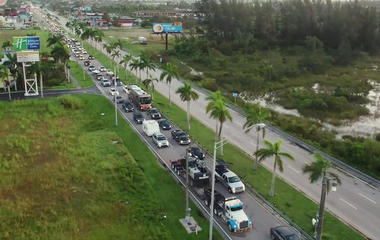 Most of the Florida Keys have no running water or communication, and almost 53,000 are without power. Route 1, the only road in and out of the Ke…

In Marathon, Florida, Simone Mullis stayed behind to feed first responders and others who didn’t leave.

She let boat owner Carl Spavold stay in her condo, which he said saved his life.

“Everybody will take their shirt off their back to help you. If you can hang around long enough you’ll see that,” Spavold said.

They saw each other for the first time since Irma.

In the Lower Keys, it is not clear when residents who evacuated will be allowed to return to their homes. With one look at one Ramrod Key neighborhood, it’s easy to understand why: Residents reported multiple tornado warnings when Hurricane Irma’s eye passed overhead, leading to the destruction of homes throughout this area.

At Big Pine Key, just west of Marathon, the monster storm’s Category 4 winds, churning 130 mph, shredded one neighborhood, CBS News’ Mark Strassmann reports. It turned a trailer park upside down, and stacked RVs as though a child had tossed toys across the room.

A boatyard was turned into a jumble of insurance claims.

There is almost no power, no water. By any measure, especially in the Lower Keys, it is a housing and humanitarian crisis that will go on for weeks. The Keys, which largely emptied out ahead of the storm, will remain desolate until that water and power is restored.

Eric Silagy’s job is to turn all the light back on. He’s the CEO of Florida Power & Light (FPL), which has to restore power to 1.5 million homes and business in South Florida’s three major counties.

“This is the first time in our company’s history that we’ve had all 35 counties in all 27,000 square miles of service territory hit,” Silagy said.

At one of 14 FPL staging areas, linemen were working 16-hour shifts to fix the outages. A utility spokesman told CBS News that all the power should be restored on the state’s east coast by Sunday night, and in about 10 days on the west coast.