The hydrogen economy has been a long time coming. The use of hydrogen as a replacement energy source for oil and gas has been talked about since the early 1970s when the term was first coined by an engineer at General Motors in the US.

It still hasn’t really arrived. And doubters remain. They point to the heavy infrastructure needed to support the technology, the huge amount of energy it consumes, and wonder how it can compete with the falling costs of wind and solar energy, and the surging interest in electric vehicles (EVs) .

Ironically, it is those very factors that are making the idea of a hydrogen economy appealing again. Wind and solar provide cheap energy, EVs are perfecting the drive trains [the power delivery system from engine to wheels] that hydrogen cars will use, and there have been significant technology breakthroughs making the hardware needed to make hydrogen much more cost-competitive.

Now it appears that in Australia, the hydrogen economy is going to have its first home in the Australian Capital Territory. Having put in place the architecture and the contracts to ensure that the equivalent of 100% of the electricity needs are sourced from wind and solar by 2020, the Labor government in the ACT is looking at how that clean energy can be used for transport and heating.

Union Fenosa, the developer of the Crookwell Wind Farm, will look at how to use hydrogen as a substitute for natural gas in gas-fired generators, either alone or in combination with natural gas; while Neoen will build Australia’s first commercial electrolyser to create hydrogen for vehicles and other uses.

Union Fenosa will invest $125m, including a research and development partnership with the Australian National University and ActewAGL Distribution. This will focus on renewable energy power to gas, investigating efficiencies in the production of hydrogen from renewables and how it can then be introduced to the ACT gas network or provide support to the electricity network. A pilot testing facility will also be established in the ACT to produce hydrogen from water using the ACT’s 100% renewable electricity supply.

For Garth Heron, the head of wind energy for Neoen in Australia, the idea of building Australia’s first commercial electrolyser came up as part of his company’s tender for the wind contract. He says there are three factors that made him change his mind about hydrogen energy.

The first is hydrogen cars. These are often dismissed by EV enthusiasts as being just like petrol cars but with different fuel. That’s not exactly right. Hydrogen cars will use the same electric drive train as EVs, and because EVs are now a major focus of production, half the development problem is solved. Furthermore, in hydrogen cars, the fuel cell – which is as easy to fill as a petrol car, according to its proponents – replaces the petrol engine, while in EVs, it’s the battery that replaces the engine.

The second issue is the amount of wind and solar energy used. The biggest input for making hydrogen is electricity. To make hydrogen, you need an electrolyser: electricity and water go in one end, and hydrogen and oxygen come out the other. But the process consumes a lot of power. Heron says that because wind and solar often produce excess energy, driving down wholesale electricity costs, this can then be used to power the electrolysers.

The third factor is new technology which means these electrolysers can be switched on and off in an instant, taking advantage of the plunges in the wholesale price of electricity, and also providing network and load support when required.

Neoen is teaming up with Siemens – which built the wind turbines for its big Hornsdale wind farm in South Australia – and will contribute $55m towards the cost of a 1.25MW electrolyser in the ACT.

That’s enough to keep 1,200 hydrogen cars going each year, but initially it will power a fleet of just 20 new-generation Hyundai hydrogen cars, enough to test the infrastructure. Still, that 20 will be the first hydrogen fleet in the country.

“The idea of a hydrogen fleet of vehicles sounds rather old-fashioned,” Garth says. “It was an idea in vogue about 10 years ago, and people thought that because of battery technology, it made no sense. But then we started hearing more about hydrogen – from Hyundai and Siemens, and looking at what Toyota was doing, we realised that the technology has moved quite far.”

“We wanted something that was major and long-lasting and could help turn the dial. And we wanted an idea that could attract business and others to the ACT to be part of the hydrogen economy that we hope will come out of it.”

Heron says using electricity at low cost means fuel for hydrogen cars might be around 75c/litre. But still, there is more work to be done. “The main thing holding back the idea of hydrogen cars is infrastructure. We are not there yet. It is a bit of a chicken-and-egg situation. We need infrastructure there to get cost down but without cars, there is no need for infrastructure. This plan in the ACT is to try to get around the situation. And we’re not saying hydrogen will replace every electric vehicle. We think there is lot of technology that common to both.” 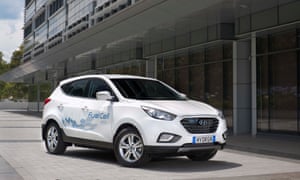 Currently Hyundai has a single hydrogen car in Australia as a demonstration model and plans that its fleet of 20 will come from a new, yet-to-be-released SUV-style vehicle.

“This is the first order in the world for the vehicle,” says Hyundai spokesman Bill Thomas. The concept is so new it does not have a name, but could be based loosely around the Intrado concept car.

“The ACT initiative is significant, because it is a forward looking and visionary statement about the potential for hydrogen for transport,” he says.

Half a dozen clean tech companies have made the ACT their home and a renewable energy hub at the Canberra Institute of Technology at Bruce has become a centre for research.

Like the ACT’s groundbreaking battery storage initiative – a program to install batteries in 5,000 homes and businesses – the hydrogen initiative will attract more investment, says Corbell. And it won’t cost the local government or taxpayers a single dollar. It was Neoen and Union Fenosa who, quite separately, brought the idea of hydrogen to the ACT as part of their wind auction tenders.

“This is an exciting project, and it is industry-led,” Corbell says. “We are not reaching a view that this technology will win over others. But it is a way to seize an opportunity to attract investment from companies – like Hyundai and Siemens – and grow our capacity to innovate.

“That’s our opportunity. We [the ACT] are not manufacturers. But we can export ideas, innovation and skills. That’s why we are supportive of these opportunities.”