Hurricane Maria as it moved away from Puerto Rico.

Leaving at least nine people dead in its wake across the Caribbean, Hurricane Maria blew ashore Wednesday morning near the southeast coastal town of Yabucoa as a Category 4 storm with winds of 155 mph. It punished the island of 3.4 million people with life-threatening winds for several hours, the second time in two weeks that Puerto Rico has felt the wrath of a hurricane.

“Once we’re able to go outside, we’re going to find our island destroyed,” warned Abner Gomez, Puerto Rico’s emergency management director. “The information we have received is not encouraging. It’s a system that has destroyed everything in its path.”

As people waited in shelters or took cover inside stairwells, bathrooms and closets, Maria brought down cell towers and power lines, snapped trees, tore off roofs and unloaded at least 20 inches of rain. 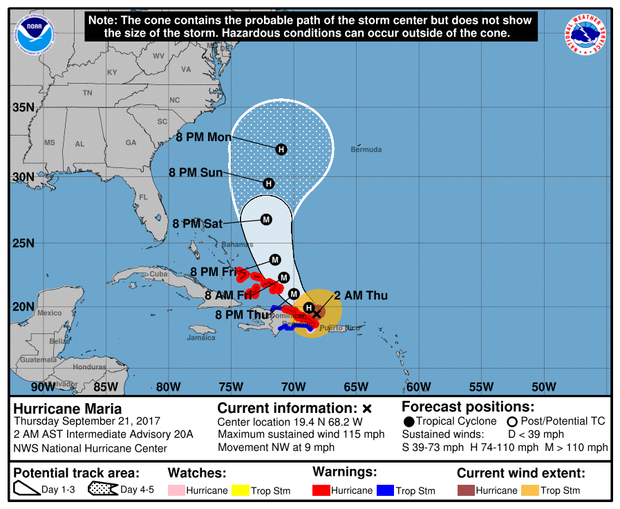 A chart provided by the National Hurricane Center shows the projected path of Hurricane Maria, with the storm centered 55 miles north of the eastern tip of the Dominican Republic at 2 a.m. Eastern, Sept. 21, 2017.

Widespread flooding was reported, with dozens of cars half-submerged in some neighborhoods and many streets turned into rivers. People calling local radio stations reported that doors were being torn off their hinges and a water tank flew away.

Follow along below for live updates on the storm. All times are Eastern unless otherwise noted.

An update from the Miami-based center says maximum sustained winds have increased to near 115 mph with higher gusts.

Maria’s fierce core was centered about 55 miles northeast of Punta Cana, Dominican Republic. It will continue to move away from Puerto Rico during the next several hours, and then pass offshore of the northeast coast of the Dominican Republic early Thursday.  Maria should then move near the Turks and Caicos Islands and the southeastern Bahamas tonight and Friday.

President Trump again tweeted about Hurricane Maria, writing “we are with you and the people of Puerto Rico” to Gov. Ricardo Rossello.

Governor @RicardoRossello-
We are with you and the people of Puerto Rico. Stay safe! #PRStrong

Earlier Wednesday Rossello asked Mr. Trump to declare the island a disaster zone, a step that would open the way to federal aid.

The National Hurricane Center said Maria is moving away Puerto Rico, but the island is still being slammed by torrential rains.

Maria is expected to bring 20 to 30 inches of rain through Saturday to Puerto Rico, the National Hurricane Center said. Strong gusty winds are still occurring over portions of Puerto Rico, but should continue to gradually subside.

The storm had maximum sustained winds of 110 mph, making it a strong Category 2 storm. The eye of Maria is moving away from Puerto Rico, heading toward the Dominican Republic and then is expected to move toward Turks and Caicos.

Felix Delgado, mayor of the northern coastal city of Catano, told The Associated Press that 80 percent of the 454 homes in a neighborhood known as Juana Matos were destroyed. The fishing community near San Juan Bay was hit with a storm surge of more than 4 feet, he said.

The U.S. Virgin Islands Department of Tourism says people who want to visit the Caribbean territory should postpone their trip while authorities assess the effects of Hurricane Maria on St. Croix and recover from the damage to St. Thomas and St. John from Hurricane Irma.

The department says Hurricane Maria brought heavy rainfall and flooding to St. Croix when it passed to the south of the island and communications throughout the islands are limited.

There were no immediate reports Wednesday of any casualties from the storm on St. Croix.