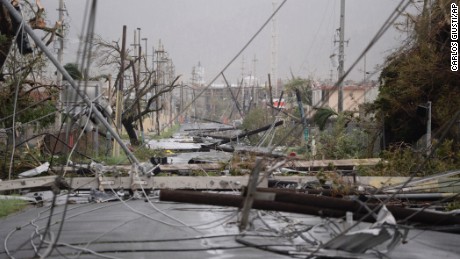 People in the northwest part of the island were urged to evacuate in the afternoon after a dam on the Guajataca River failed, according to a tweet from the National Weather Service.
The storm hit Puerto Rico two days ago and knocked out power in the US commonwealth of more than 3 million people, Gov. Ricardo Rosselló said. And it could be months before the electricity returns.
A gradual weakening of Maria is forecast over the next two days, but the Category 3 hurricane still socked the Turks and Caicos, a British overseas territory of more than 52,000 people.
Maria’s core left the Turks and Caicos in a north-northwestward direction and was gradually moving away from the Bahamas, the center said in its 8 p.m. advisory.
A dangerous storm surge and large waves will raise water levels by as much as 9 to 12 feet above normal tide in the Turks and Caicos and southeastern Bahamas, the center said.

The giant storm’s death toll continues to mount.
At least 15 people are confirmed dead on Dominica, and dozens more remain missing. One person died in the US Virgin Islands, probably from drowning, authorities said.
At least six people were killed in Puerto Rico, said Héctor M. Pesquera, the island’s public safety director.
Earlier, Puerto Rico’s governor told CNN’s “New Day” that 13 people had died in the storm. The figure was based on reports from mayors on the island, but law enforcement hasn’t confirmed that total, the government said.
“Flash flooding continues in portions of Puerto Rico and the Dominican Republic due to persistent heavy rainfall from Maria’s trailing rain bands,” the hurricane center said.
The rain could spur “life-threatening flash floods and mudslides.”
Maria is producing winds of near 125 mph (more than 200 kilometers per hour) with higher gusts. Moving at 9 mph (15 kilometers per hour), it was 375 miles (600 kilometers) east-southeast of Nassau, Bahamas.
The government of the Bahamas changed the hurricane warning for the Turks and Caicos Islands and the southeastern Bahamas to a tropical storm warning, the weather service said. A tropical storm warning is in effect for the central Bahamas.
Heavy rainfall is expected through Saturday. In Turks and Caicos, 8 to 16 inches are predicted, with 20 inches in some places, and in Puerto Rico, an additional 3 to 6 inches is likely, with isolated maximum storm totals at 40 inches.
Heavy rains are expected in parts of the Dominican Republic, Haiti and the Bahamas.

Maria will move closer to the US East Coast and Bermuda by the middle of next week, “but it is too soon to determine, what, if any direct impacts there might be in these areas,” the hurricane center said.
Swells from the storm are expected to begin reaching the US Southeast coast, the center said.
“These swells are likely to cause dangerous surf and life-threatening rip currents along the coast for the next several days, even with Maria forecast to remain well offshore over the western Atlantic Ocean,” it said.
Survivors of Hurricane Maria need assistance

Parts of the Caribbean that Maria has already struck are just coming to terms with the extent of their losses.
CNN’s Michael Holmes, who is on Dominica, said that almost all trees from the lush paradise have been denuded, leaving a stark, brown landscape in its place.
Aid had been stockpiled before Hurricane Irma, the storm that recently preceded Maria, but it was distributed to neighboring islands after Dominica appeared to have avoided the worst of it. Then came Maria.
Dominica knocked to its knees by Hurricane Maria’s might
In Puerto Rico, every inch of the island was hammered when Maria made landfall Wednesday.
As many as 4,500 Army reservists have been brought in to complement the Puerto Rican National Guard, says Brig. Gen. Dustin Shultz, who is commanding the reserves in the Caribbean during rescue effort.
Gov. Kenneth E. Mapp of the US Virgin Islands is calling for “all hands on deck” as the territory expands recovery efforts after both Irma and Maria struck in less than two weeks.
The Royal Navy’s flagship HMS Ocean arrived in the British Virgin Islands with about 650 personnel and 60 tons of cargo, including construction equipment, hygiene kits and water purification tablets. The ship’s arrival means there are now more than 2,000 UK military personnel working on relief.
US President Donald Trump has pledged federal help for Puerto Rico and the US Virgin Islands.

In San Juan, Ashford Presbyterian Community Hospital suffered damage. It’s part of life in the “hurricane corridor,” hospital planning director Margo Silva told CNN.
“We’re used to dealing with this. Unfortunately, being so close to the ocean, these circumstances come up,” Silva said
The air conditioning had failed, meaning patients such as 103-year-old Diosa Alarondo were suffering in the heat.
She’s been at the hospital for two months, and her daughter Jacqueline Alarondo was distressed. Water only arrived Thursday afternoon, she said. “It was bad, messed-up organization from the administration.”
But another patient, Ana Rivera, said it might have been the best place to ride out the storm. The food comes on time, and they’ve been treating her well, she said.
Ten miles west of the capital, residents trudged through floodwaters to reach their homes — many of which no longer had roofs.
Sylvia Colon fought back tears as firefighters and the National Guard reached her 84-year-old neighbor. She refused to leave the woman who, she says, is like a grandmother to her.
One girl, Marytere, 16. had to cross floods with her family, clutching small dogs, along with bags filled with food, toiletries and pillows, to reach the rescue team.
The family had left to find help when the water got too high. “I’m scared of what’s going to happen now to us,” she said, wiping away tears.
“What’s the family going to do now?”

CNN’s Nick Valencia and Leyla Santiago reported from Puerto Rico, while Joe Sterling reported and wrote from Atlanta, and Euan McKirdy reported and from Hong Kong. CNN’s Marilia Brocchetto contributed to this report.