It’s a repeal-and-replace proposal that less than a week ago seemed dead on arrival in the Senate. The Republicans, after all, had tried repealing Obamacare before – multiple times in fact — and the bill’s lead sponsors Sens. Lindsey Graham of South Carolina and Bill Cassidy of Louisiana were two of the only members willing to go on record to say the Senate had to try it again.
CNN Money: What’s in the latest Obamacare repeal bill?
Their optimism, however, seemed to spread in a closed-door meeting Thursday in which members and aides say that Majority Leader Mitch McConnell made it clear that he would bring the bill to the floor if Cassidy and Graham delivered the votes to pass it. There was a recognition that the GOP didn’t have any choice but to try again to finally deliver on their seven-year campaign promise.
“We talked about the bill and the leader said ‘Look I’ll help you get across the finish line’ and everybody started looking more at the bill. I started looking at it this weekend really for the first time,” said Sen. John Kennedy of Louisiana.
Sen. Pat Roberts, a Republican from Kansas, said everyone is aware this is the last shot.
“We’d like to do something and something’s better than nothing,” Roberts said.
By Monday, the momentum was growing. Behind the scenes, Cassidy and Graham were engaged in a full-court press, reaching out to colleagues and leadership and trying to get them to back their plan publicly. By Monday, House Speaker Paul Ryan was calling the plan the “best, last chance” the GOP has to overhaul Obamacare — and the Senate’s finance committee had announced a hearing on the proposal.
Asked what Cassidy’s role had been in the process, South Dakota Republican Sen. John Thune, a member of leadership, called Cassidy a “grave robber.”
“He’s the grave robber,” Thune said. “This thing was six feet under and I think he’s revived it to the point where there’s actually a lot of positive buzz and forward momentum but it still comes down to, in the Senate, getting 50 votes.”
Democrats scramble to rally troops for another Obamacare fight
Thune underscored a reality that, despite the optimism and forward moment, remains clear and daunting: getting to 50 votes is far from a sure thing, aides acknowledged. In fact, given the policy that defines the proposal, it will take several wavering senators to turn back on clearly stated red lines on things like Medicaid expansion and the defunding of Planned Parenthood in order secure their support.
It also creates the very real possibility that Republicans, should they fall short, would come face to face with another seismic failure to their agenda — all at a time when they planned to be moving on to an equally important issue: tax reform.

Republican leadership had refocused their attention on tax reform after they failed to pass the so-called “skinny repeal” bill in July. The “Big Six,” a group of Republican leaders focused on tax reform, had continued to meet to hash out a framework and House Ways and Means Committee Chairman Kevin Brady had announced last week the GOP was close to unveiling another blueprint next week.
Health care was in the rear-view mirror, but deadlines have a way of reshaping priorities on the hill.
Last month, the Senate’s parliamentarian informed the budget committee that the Senate only had until September 30 to repeal Obamacare with just a simple majority. 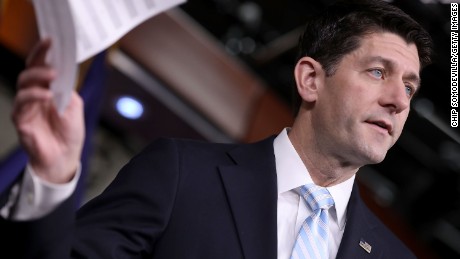 “This is one of those deals where this vehicle that we’re using turns into a pumpkin on September 30 if we don’t get something else done,” said South Dakota Sen. Sen. Mike Rounds.
The time crunch is extreme especially by Senate standards. Lawmakers are only expected to be in session for three days this week, leaving Republicans just next week to bring a health care bill to the floor, endure the amendment process and pass it.
Adding to the uncertainty is the Congressional Budget Office. The non-partisan office said Monday said it may take several weeks to review the plan and report on how Graham-Cassidy will impact premiums and how many people stand to lose health care coverage. That creates the possibility senators are voting on a bill whose impact is unknown.

What’s in the bill?

The Graham-Cassidy bill could be the most far-reaching of the repeal efforts this year.
The legislation would eliminate federal funding for Medicaid expansion and for Obamacare subsidies that lower premiums, deductibles and co-pays in 2020.
Instead, states would receive a lump sum of money annually through 2026 that they could use in a variety of ways, including helping consumers pay for premiums or shielding insurers from costly, sick enrollees by funding high-risk pools or reinsurance programs.
The bill would also waive several key Obamacare protections for those with pre-existing conditions. While insurers would be required to provide coverage to everyone, it would allow carriers to charge enrollees more based on their medical history.
The legislation also would eliminate Obamacare’s essential health benefits provision, which mandates insurers cover an array of services, including hospitalization, maternity care, prescription drugs, mental health and substance abuse services.
The bill shares several measures with its predecessor repeal bills in the House and Senate. It would repeal the individual and employer mandates. It also would reduce federal support for the overall Medicaid program by sending states a fixed amount per enrollee, known as a per-capita cap, or a lump sum, known as a block grant. And it would allow states to institute a work requirement.
It would defund Planned Parenthood for one year. The bill would also repeal a few taxes, including the much-loathed levy on medical devices. But it would keep the taxes on health insurers and on the wealthy.

On Monday night, many Republican senators said they were still trying to digest Graham-Cassidy, a tenuous sign for the future of the legislation.
“I haven’t decided yet,” said Sen. Pat Toomey, a Republican from Pennsylvania.
“I got to get the rest of the details,” said Republican Sen. Steve Daines of Montana.
The biggest obstacle remains that key members of the Republican conference who voted against the last GOP health care proposal are still on the fence. It was never getting to 47 votes that was the problem, it was getting to 50. As of Monday night, Sen. Susan Collins, told reporters she was concerned about the bill’s effect on her state and the Medicaid population.
Sen. Lisa Murkowski of Alaska told reporters she was “still looking,” but that she had some concerns about whether there would be enough funding for Alaska, which has some of the most expensive health care in the country. 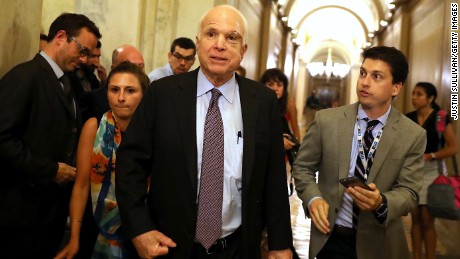 “I need to figure out how all the numbers work,” Murkowski said. “We’re continuing to go back and forth. I sat with Sen. Cassidy last week, and we’re continuing to share numbers.”
Murkowski, whose vote aides acknowledged is a crucial one, is expected to get special attention in the days ahead as leaders attempt to address her concerns and get her comfortable with the proposal.
The bill got a bit of a boost Monday afternoon when Arizona Gov. Doug Ducey announced his support for it, but that wasn’t quite enough to pull Republican Sen. John McCain on board. The senior senator from Arizona who stunned the political world July when he voted against the last health care proposal, said he is still “deeply disturbed” by the fact that the Graham-Cassidy bill has not gone through a rigorous committee process or “regular order.”
Reminded of how tight the timeline was, McCain said that wasn’t his concern.
“We’ve had nine months. That’s my answer,” he said. “We’ve had nine months to get it done and we haven’t so is it my problem now that we only have a week? It’s not my problem.”