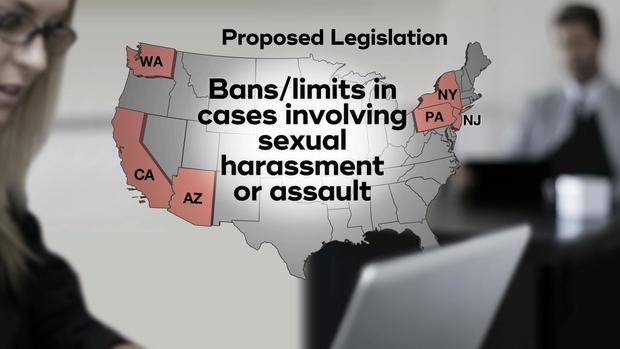 The recent avalanche of sexual misconduct allegations has cast a spotlight on nondisclosure agreements (NDA), the contracts employers use to keep such matters private.

“I signed the nondisclosure agreement and I think at the time, I hoped, I’m just going to close my eyes and make this go away,” said former Fox News anchor Juliet Huddy.

She said her understanding of the agreement was “both sides, keep your mouth shut.”

Using nondisclosure agreements is a common practice. They’re generally used to help protect the secrecy of confidential information about a company. But in the wake of growing sexual misconduct claims, we’ve seen how they can be used to keep those claims a secret.

Across the country, at least six states have recently proposed legislation to ban or place limits on workplace nondisclosure agreements in cases involving sexual harassment or assault.

This week, bipartisan legislation was introduced on Capitol Hill that would eliminate forced arbitration, which prevents sexual harassment victims in many cases from going public, and going to court.

For Juliet Huddy, she says in retrospect, signing the NDA was a bad idea.

“The tears are coming because I’m upset with myself for not dealing with it and again, potentially preventing him from doing something else to somebody,” Huddy said.

CBS News reached out to Bill O’Reilly and he had no comment. Earlier this week, a woman with whom he reached a settlement filed a lawsuit asking she be released from her NDA.