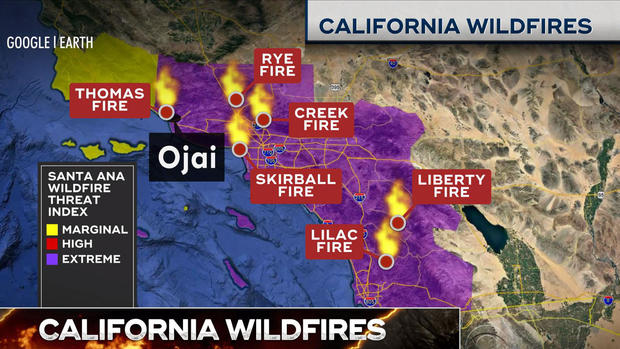 A brush fire driven by gusty winds that have plagued Southern California all week exploded rapidly Thursday north of San Diego, destroying dozens of mobile homes in a retirement community and killing race horses at an elite training facility.  The fire exceeded 6 square miles in a matter of hours and tore through the tightly packed Rancho Monserate Country Club community in the small city of Fallbrook, known for its avocado orchards and horse ranches.

The destructive blaze broke out as firefighters tried to corral the largest fire in the state, which was burning around Ventura – 130 miles to the north. It destroyed at least 430 buildings as it grew to 180 square miles since Monday. Fire crews also fought large fires around Los Angeles. The Ventura and L.A.-area fires put tens of thousands of people under evacuation orders.

According to CalFire, as of very late Thursday night, six large fires had burned  220 square miles, 190,000 residents were evacuated, 23,000 homes were threatened, 500 were confirmed destroyed and there were 5,700 firefighters on the lines.

A woman was found dead in a wrecked car in an evacuation zone near the city of Santa Paula, where the Ventura County blaze began Monday night, but officials couldn’t immediately say whether the accident was fire-related.

Follow along below for live updates on the fires. All times are Eastern unless otherwise noted.

The wildfires burning in Southern Califorina on Dec. 7, 2017

CalFireSanDiego reports three people suffered burns in the Lilac fire and one was suffering from smoke inhalation. In addition, the agency said one firefighter sustained a minor injury and another had smoke inhalation.