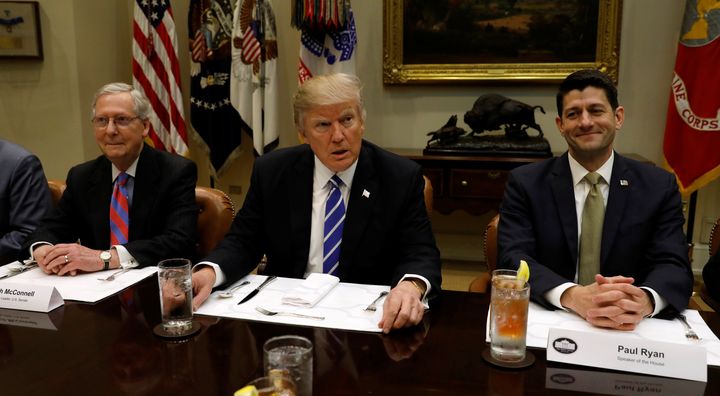 The nearly 500-page overhaul of the tax code that Republicans rammed through the Senate early Saturday morning gave lawmakers and experts little more than a moment’s notice to pore over the law’s myriad changes.

But one thing is clear: The bill is filled with perks for America’s wealthiest individuals and largest corporations, many of them paid for by closing loopholes that benefit middle-class people. By 2027, the top one-fifth of earners would receive 90 percent of the tax bill’s benefits, according to an analysis by the nonpartisan Tax Policy Center.

Here are some of the legislation’s most outrageous components ― from giveaways for the super-rich to carve-outs for private schools.

The centerpiece of the Republican tax bill is its slashing of the top corporate tax rate from 35 percent to 20 percent. Republicans claim this is necessary to restore American competitiveness, noting that, on paper at least, the United States has one of the highest corporate rates in the developed world.

However, many large corporations are able to take advantage of deductions and loopholes that allow them to register profits overseas. This means that in practice, the average effective corporate tax rate on profit from new investments in the U.S. is 24 percent ― just a shade higher than the G-7 average of 21 percent.

There are, of course, proponents of a lower corporate tax rate in both major political parties. Former President Barack Obama, for example, proposed lowering the top corporate rate to 28 percent as part of a revenue-neutral, comprehensive tax reform package.

But without major changes in the way corporations do business, a big corporate tax cut is not actually likely to result in more job creation and higher wages. Instead, it is just a windfall for the corporate executive suite that is bound to exacerbate income inequality.

That’s because corporate incentives are such that executives and their boards are rewarded for how much they maximize quarterly returns for big investors, not how much they invest in the long-term growth of their companies ― let alone how they treat their workers. As a result, Fortune 500 CEOs and their fellow decision-makers are just as likely to spend the extra cash they get from this massive tax cut on dividends and stock buybacks, rather than expanding their workforces. They have even said as much.

Sen. Ted Cruz (R-Texas) succeeded in adding an amendment to the final bill that would expand tax-exempt 529 college savings plans to parents saving for K-12 private school tuition, as well as expenses associated with home schooling.

Technically the expanded savings accounts would allow parents to amass tax-free savings for public school education as well, but it is not at all clear what major costs are incurred from a public school education. And there are no exceptions to the types of schooling eligible for the tax break, meaning that the tax code is now almost certain to subsidize private religious education.

“By expanding choice for parents and opportunities for children, we have prioritized the education of the next generation of Americans, allowing families to save and prepare for their children’s future educational expenses,” Cruz said in a statement about the amendment’s passage.

Although the tax benefit is sure to save some families money, the ballooning cost of private elementary and secondary school makes it unlikely that it will increase access to private school for middle- and low-income kids.

Average annual tuition at non-sectarian private elementary schools rose from $4,120 in 1979 to $22,611 in 2011, according to a study by the National Bureau of Economic Research released in July. It’s no surprise then that in 2013, 26 percent of families in urban area with incomes in the 90th income percentile sent their kids to private school, compared to just 7 percent of families in the 50th percentile, according to NBER. In 1968, by contrast, the study said, there was a gap of just 5 percentage points in the two income groups’ respective rates of private school enrollment.

Encouraging corporations to automate ― without any help for displaced workers.

A provision of the tax bill would allow companies to deduct from their taxable income the entire cost of certain kinds of business investments that were previously only eligible for a 50 percent deduction. Traditionally, manufacturing firms and other infrastructure-heavy companies took advantage of the deduction to buy new factory equipment.

But the increase in the deduction comes at a time when corporations are investing in automation of their production facilities through the use of robots and artificial intelligence technology, noted Robert Kovacev, a corporate tax attorney for the Steptoe & Johnson law firm in Washington, D.C.

Kovacev is supportive of the deduction, because automation is likely to increase productivity ― defined as the amount of economic output generated per work-hour. And many experts maintain that, over the long run, this type of technological disruption is a net job creator.

That is likely to serve as cold comfort, however, for the mostly blue-collar workers displaced by automation in the short term. And Congress chose to speed up the automation process without any companion measures to offset the fallout for affected workers.

“It would be a good idea to pair this with a tax incentive to encourage companies either to employ more human workers or retrain them for jobs in the new economy,” Kovacev said.

Some progressive lawmakers have other ideas about how to address the harm caused by automation. For example, San Francisco County Supervisor Jane Kim has explored the idea of implementing a ”robot tax” on companies for every robot they employ to perform a job previously done by humans. The revenue raised by the tax would fund the retraining of displaced workers.

Setting the stage for cuts to Social Security, Medicare and Medicaid.

The Republican tax bill will add $1 trillion to the national debt over a 10-year period, according to the most recent estimate from the Joint Committee on Taxation, a nonpartisan congressional tax analysis body. The lack of measures to pay for the tax cuts is why Sen. Bob Corker (R-Tenn.) decided to vote against the final Senate bill, becoming the only Republican to do so.

Many progressive economists believe the national debt is not a major challenge at this juncture. Interest rates on Treasury bonds remain low by historical standards.

Still, once Republicans pass their budget-busting tax cuts, they frequently stoke debt fears to justify taking an ax to federal spending. They did it when Obama took office despite their overwhelming support for former President George W. Bush’s tax cuts, and they have already indicated they plan to do it again.

This time, though, they are coming for the three largest social insurance programs ― Social Security, Medicare and Medicaid.

Sen. Marco Rubio (R-Fla.) was one of several Republican lawmakers to explicitly say that following the changes to the tax code, the next priority would be scaling back so-called “entitlement” spending.

Rejecting a proposal to expand a tax credit for families with children in order to reduce the corporate tax rate even more.

Rubio and Sen. Mike Lee (R-Utah) wanted to add an amendment to the tax bill that would have modestly expanded the Child Tax Credit, which is effectively a cash benefit for low-income working families with children. The latest version of the change would have provided some 10 million families with about $75 more per year, according to the Center on Budget and Policy Priorities, a liberal think tank.

To pay for the roughly $87 billion price of expanding the tax credit, Rubio and Lee proposed reducing the top corporate tax rate to just under 21 percent, rather than the 20 percent threshold that President Donald Trump and GOP leaders were seeking.

The amendment collapsed in a 71-29 vote with just 20 Republicans and nine Democrats voting for it.

Most Republicans objected to the amendment on the grounds that the corporate rate needed to drop to 20 percent. Democrats declined to rally behind it, because they argued that the tax credit was far too small to provide meaningful help to vulnerable people and that GOP leaders would ultimately strip it out in conference committee regardless.

All but eliminating the estate tax for the country’s wealthiest households.

Under the Senate bill, an even tinier sliver of households in the country would be subject to the estate tax levied on the assets that ultra-rich individuals leave to their heirs when they die.

Currently, $11 million in assets are exempt from the estate tax, ensuring that it falls on just 0.2 percent of American households with taxable assets. While the top statutory estate tax rate is 40 percent, the average effective rate paid by families subject to the tax is about 17 percent, according to the Tax Policy Center. The tax nonetheless serves as a major source of revenue for the federal government and achieves the additional goal of modestly limiting intergenerational wealth transfers, which some experts believe undermine meritocracy and social mobility.

The Senate bill would double the estate tax exemption to $22 million for couples, eliminating the tax entirely for half the estates that currently pay it, according to the Center on Budget and Policy Priorities. Those households still subject to the tax would get a $4.4 million tax cut, which CBPP points out would be enough to provide Pell grants to fund college tuition for 1,100 low- and moderate-income students.

The bill Republicans passed in the House gets rid of the estate tax entirely over time.