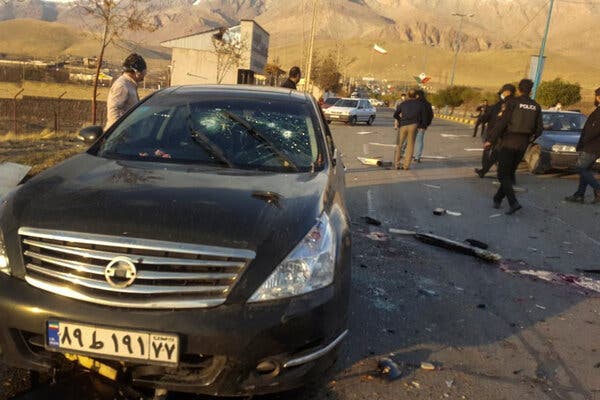 Iran’s top nuclear scientist, long identified by American and Israeli intelligence as the guiding figure behind a covert effort to design an atomic warhead, was shot and killed Friday in what Iranian media called a roadside ambush as he and his bodyguards traveled outside Tehran.

For two decades, the scientist, Mohsen Fakhrizadeh, was the driving force behind what American and Israel officials describe as Iran’s secretive nuclear weapons program. And his work continued after Iran’s push to develop a bomb was formally disbanded in 2003, according to American intelligence assessments and Iranian nuclear documents stolen by Israel nearly three years ago.

One American official — along with two other intelligence officials — said that Israel was behind the attack on the scientist. It was unclear how much the United States may have known about the operation in advance, but the two nations are the closest of allies and have long shared intelligence regarding Iran, which Israel considers its most potent threat.

Iranian officials, who have always maintained that their nuclear ambitions are for peaceful purposes, not weapons, expressed fury and vowed revenge over the assassination, calling it an act of terrorism and warmongering that they quickly blamed on Israeli assassins and the United States.

The White House, C.I.A. and Israeli officials declined to comment. But Mr. Fakhrizadeh’s assassination — only 10 months after the United States killed the powerful spymaster at the head of Iran’s security machinery in a drone attack in Iraq — could greatly complicate President-elect Joseph R. Biden Jr.’s plans to reactivate the 2015 nuclear agreement between Tehran and six other nations, which curtailed Iran’s nuclear activities.

Mr. Biden’s transition team had no immediate comment on the assassination.

The assassination of Mr. Fakhrizadeh had the hallmarks of a precisely timed operation. Iranian state media said gunmen waited along the road and attacked as his car was driving through the countryside town of Absard, an area known as a bucolic escape with majestic mountains about 40 miles east of Tehran.

Pictures posted by state and social media of the attack aftermath showed the scientist’s vehicle, a black S.U.V., with its windshield shattered from bullets and the side windows blown out. Blood streaks and shards of glass and metal were scattered on the road.

Protests erupted outside government buildings in Tehran to demand revenge, much as they did after the Jan. 3 attack that killed Qassim Suleimani, the Iranian major general who ran the elite Quds force of the Islamic Revolutionary Guards Corps.

Mr. Zarif, who negotiated the Iran nuclear deal and remains one of Iran’s most recognizable figures, said in the post that the international community should “end their shameful double standards & condemn this act of state terror.”

Brig. Gen. Mohammad Bagheri, chief of staff for Iran’s armed forces, said in a statement that “we will not rest until we track down and take revenge on those responsible for the assassination of martyr Fakhrizadeh.”

On Friday night, Iran sent a letter to U.N. Secretary General Antonio Guterres, condemning what it called “a terrorist attack” and warning that the country “reserves its rights to take all necessary measures to defend its people and secure its interests.”

It is difficult to predict the precise fallout from the killing. A weakened Iran, having lost two of its most celebrated military and nuclear figures in the last year alone, may be eager for new negotiations with the Biden administration.

Yet the twin assassinations may have poisoned the well. Hard-liners in Iran may win the argument that they cannot bend to outside pressure and should redouble their efforts to resist the West in memory of Mr. Fakhrizadeh, who they declared had been martyred.

The former director of the C.I.A. under Mr. Obama, John Brennan, called the killing “a criminal act & highly reckless” in a tweet. “It risks lethal retaliation & a new round of regional conflict,’’ he wrote, urging Iran to “wait for the return of responsible American leadership” and resist temptations to strike back.

The Pentagon’s former top Middle East policy official, Michael P. Mulroy, said the death of Mr. Fakhrizadeh was “a setback to Iran’s nuclear program.” He noted that the scientist “was also a senior officer in the Islamic Revolutionary Guards Corps, and that will magnify Iran’s desire to respond by force.”

It was unclear whether Secretary of State Mike Pompeo, one of the most vocal Iran hawks in the administration, had been given any advance warning of Israel’s plans when he visited Prime Minister Benjamin Netanyahu of Israel last week.

But some American officials argued that the death of Mr. Fakhrizadeh, the latest in a string of such killings of Iran’s top nuclear scientists that date back a dozen years, amplifies the chilling message to the country’s other top scientists working on that program: If the well-guarded head cannot be protected, neither can anyone else.

It also remains unclear how much the killing will set back the Iranian program. Mr. Fakhrizadeh had the background and oversight to understand the challenges of physics and politics the Iran nuclear program faced.

But Iran recovered from the assassinations of lower-level scientists, and from the cyberattacks from 2007 to 2010 on the nuclear fuel production site at Natanz, a joint Israeli-American operation code-named “Olympic Games.” That operation set Iran back by a year or so.

The killing of Mr. Fakhrizadeh comes just two weeks after intelligence officials confirmed that Al Qaeda’s second-highest leader was gunned down on the streets of Tehran by Israeli assassins on a motorcycle on Aug. 7, at the behest of the United States.

The Qaeda figure, Abdullah Ahmed Abdullah, went by the nom de guerre Abu Muhammad al-Masri and was accused of being one of the masterminds of the deadly 1998 attacks on two U.S. embassies in East Africa. He was killed along with his daughter, Miriam, the widow of Osama bin Laden’s son Hamza bin Laden.

But the Qaeda official was a foreigner; Mr. Fakhrizadeh was a national hero, a figure of resistance to the West and its insistence that Iran could not have its own nuclear technology.

Iran never agreed to demands from the International Atomic Energy Agency, the United Nations’ nuclear monitor, to let U.N. inspectors question Mr. Fakhrizadeh, saying he was an academic who lectured at the Imam Hussein University in Tehran.

Mr. Fakhrizadeh was an academic, but a series of classified reports, notably a lengthy 2007 assessment done by the C.I.A. for the George W. Bush administration, said the academic role was a cover story. In 2008, his name was added to a list of Iranian officials whose assets were ordered frozen by the United States.

That same year, his activities were disclosed in an unclassified briefing by the I.A.E.A.’s chief inspector. Later, it became clear that he ran what the Iranians called Projects 110 and 111 — an effort to tackle the most difficult problems bomb designers face in creating a warhead small enough to fit atop a missile and make it survive the rigors of re-entry into the atmosphere.

He stayed out of sight for years. But an Israeli operation in early 2018 that stole a warehouse full of Iranian documents about “Project Amad,” what the Iranians called the nuclear weapons effort 20 years ago, included documents about Mr. Fakhrizadeh, and at least one handwritten by him, the Israelis contended.

Shortly thereafter, Mr. Netanyahu singled out Mr. Fakhrizadeh in a televised presentation, when he described the secret Israeli operation to seize the archive. Iran had lied about the purpose of its nuclear research, he charged, and he identified Mr. Fakhrizadeh as the leader of the Amad program.

Israeli officials, later backed up by American intelligence officials who reviewed the archive, said the scientist had kept elements of the program alive even after it was ostensibly abandoned. It was now being run covertly, Mr. Netanyahu argued, by an organization within Iran’s defense ministry known as S.P.N.D. He added: “You will not be surprised to hear that S.P.N.D. is led by the same person who led Project Amad, Dr. Fakhrizadeh.”

The assassination comes at a time of greatly heightened tensions between Iran and the Trump administration. Mr. Trump was dissuaded from striking Iran just two weeks ago, after his aides warned it could escalate into a broader conflict during his last weeks in office.

Mr. Trump had asked senior advisers in an Oval Office meeting on Nov. 12 whether he had options to take action against Iran’s main nuclear site at Natanz in the coming weeks. Days later, Mr. Pompeo visited Israel on what could be his last trip there in office.

Such a strike on the eve of a new administration could poison relations with Tehran to such an extent that negotiating a restoration of the nuclear deal, or toughening its terms, could be impossible.

Since Mr. Trump dismissed the secretary of defense, Mark T. Esper, and other top Pentagon aides earlier this month, Defense Department and other national security officials have privately expressed worries that the president might initiate operations, overt or secret, against Iran or other adversaries at the end of his term. Others have said that Mr. Netanyahu, who at various moments has been on the edge of attacking Iran’s nuclear facilities, might seek to act while Mr. Trump is still in office.

While Mr. Trump’s top advisers — including Mr. Pompeo and Gen. Mark A. Milley, the chairman of the Joint Chiefs of Staff — argued against a military strike against Iran, top American officials and commanders still warn of what they call Iran’s malign activities.

In Iran, some officials and commentators acknowledged that Mr. Fakhrizadeh’s loss had created a significant void in the country’s pursuit of nuclear science, but vowed that it would not be halted. Others also voiced concern over what apparently was a yawning security hole that they said had allowed Israeli operatives to infiltrate Iran.

“Israel has camped out here in a bad way. The recent events of this year make this clear,” a former vice president, Mohammad Ali Abtahi, said on Twitter. “Iran’s security strategy should be to find Mossad’s spies and informants.”