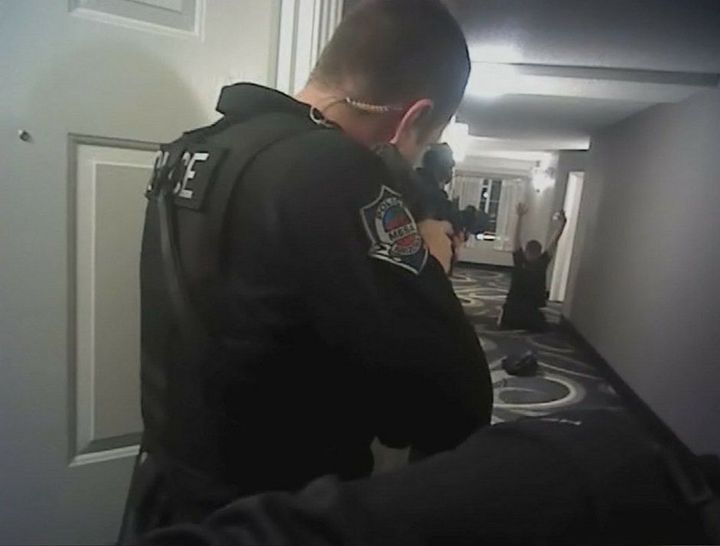 After a former Arizona cop this week was acquitted of murder in the shooting death of an unarmed man, officials released video of the victim’s final moments.

On the nearly five-minute video, which was recorded by then-Mesa police officer Philip “Mitch” Brailsford’s body camera, an officer can be heard giving commands to 26-year-old Daniel Shaver in a La Quinta Inn & Suites hallway on Jan. 18, 2016.

“If you make a mistake, there is a very real possibility that … you will be shot,” one of the officers can be heard shouting. “I’m not here to be tactical or diplomatic with you.”

Brailsford and several other officers were at the hotel investigating a report of someone seen pointing a gun out a fifth-floor window. They suspected Shaver was involved.

Shaver, who had been ordered out of his hotel room by police, was commanded to lie facedown in the hallway and to refrain from making sudden movements.

The married father of two from Granbury, Texas, can be heard crying and appears confused by some of the officers’ commands. On the video, Shaver says, “Please do not shoot me,” as he obeys a command to crawl toward the officers.

As he inched forward, Shaver reached toward his waistband. The movement prompted Brailsford to fire his AR-15 rifle five times, killing Shaver.

The former cop said he suspected Shaver was reaching for a weapon. A detective assigned to investigate the case later said it appeared Shaver was attempting to pull his pants up.

No weapon was found on or near Shaver’s body. However, investigators did find two pellet rifles in his hotel room. Those rifles were reportedly related to Shaver’s pest-control job. Authorities later learned that he was at the hotel on a work-related trip.

Two months after the shooting, Brailsford was removed from the force for violations of departmental policy. Prosecutors ultimately charged him with second-degree murder and reckless manslaughter.

A Maricopa County jury deliberated for six hours this week before finding Brailsford not guilty on both counts on Thursday.

After the verdict, Laney Sweet, Shaver’s widow, declined to comment to reporters. Her attorney, Mark Geragos, told USA Today he was disappointed in the verdict. He called the shooting an “execution.”

Brailsford’s lawyer, Michael Piccarreta, said his client had only a split-second to make a decision.

“He didn’t want to harm Mr. Shaver,” Piccarreta said, according to the Daily News. “The circumstances that night that were presented led him to conclude that he was in danger. Try to make a decision in one second, life or death. It’s pretty hard.”