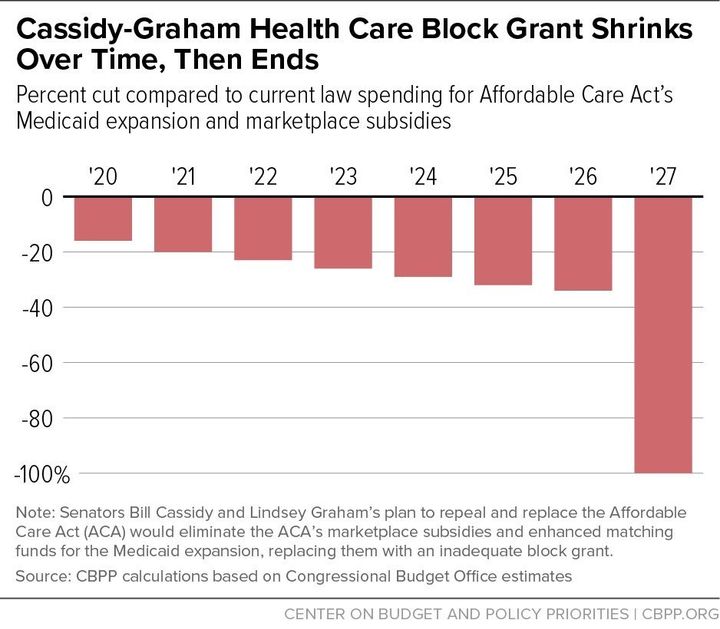 Repeal of the Affordable Care Act is back on the agenda, with Republicans suddenly talking about passing a bill that, until recently, few people in either party had taken all that seriously.

The prospects for the new legislation passing are murky. The proposal has generated a ton of conversation in political and health policy circles in just the past week, with multiple outlets reporting that leadership is now thinking about floor action before Sept. 30. That’s the magic date when, because of parliamentary rules, Republicans lose their ability to pass repeal with just 50 votes. But much of the chatter is hype from supporters and it’s hard to know just how difficult assembling a majority will be.

Still, even if the bill’s political fortunes are difficult to pin down, the impact it would have as a law is crystal clear. By dramatically scaling back what the federal government spends on health care and undermining rules designed to guarantee insurance for people with pre-existing conditions, this new proposal would leave millions of Americans struggling to pay their medical bills and to get coverage.

It is, in other words, another shot at full repeal, although its GOP sponsors sometimes suggest otherwise ― and that’s one reason it has escaped heavy scrutiny until now.

A New Bill With The Same Old Devastating Effects On Coverage

Those sponsors are Bill Cassidy of Louisiana and Lindsey Graham of South Carolina ― an unlikely duo, perhaps, given some of their previous statements about repeal. During the spring and summer, Graham repeatedly criticized his party’s leadership for trying to jam through legislation on a party-line vote, without trying to work with Democrats or going through the usual committee process.

Cassidy, for his part, famously urged his colleagues to pass what he dubbed “the Jimmy Kimmel test” ― a reference to the late-night television host’s impassioned public plea to make sure everybody has access to care, regardless of income or medical condition, after his newborn son was diagnosed with a genetic heart defect. Cassidy’s grandstanding on access to care seemed to make sense, given that previously he had worked with Sen. Susan Collins (R-Maine) on a skeletal proposal that he promised would let states keep their versions of “Obamacare” intact if they so chose. “California, New York — you love Obamacare, you can keep it,” Cassidy said.

But when it came time to vote repeal legislation in late July, there was Graham voting yes, even though leadership had ignored his pleas for regular order, and there was Cassidy right there alongside him, even though the bills would have violated the Kimmel test by depriving millions of coverage. Now the pair is back with a proposal that would (yet again) go straight to a floor vote and would (yet again) mean no coverage for tens of millions.

Starting in 2020, the Cassidy-Graham bill would entirely eliminate both the Affordable Care Act’s subsidies and the enhanced federal funding that underwrites the expansion of Medicaid in 31 states (plus the District of Columbia). The bill would then establish a “block grant,” handing money directly to the states for helping people to pay for health care. This would produce the best of all worlds, as Cassidy and Graham would say, because it would mean states could stop worrying about the complications of the Affordable Care Act and simply use that money in ways that will work best for them and their citizens.

In reality, the Cassidy-Graham would shrink the federal investment in health care programs dramatically, by somewhere in the neighborhood of $400 billion over the next ten years, or maybe even more, according to a preliminary and rough analysis by the Center on Budget and Policy Priorities. Starting in 2027, the money would vanish altogether. In theory, Congress could appropriate new money then, a possibility Cassidy and Graham have raised in an effort to soothe those nervous about such a dramatic drop-off in funds. In practice, it would take $200 billion each year just to keep pace. That’d be a huge ask for any Congress.

It’s true the bill would give states new flexibility ― so much flexibility, in fact, that they wouldn’t have to direct the funding to the low- and middle-income Americans who need the help most. Nor would they have to keep regulations that prohibit insurers from charging higher premiums to people with pre-existing medical conditions, or include benefits like mental health and maternity that carriers frequently excluded in the old, pre-Obamacare days and would almost surely start excluding again if they had the chance.

“This bill is far more radical [than previous repeal bills] in that it envisions going back to the pre-ACA world, where the federal government wasn’t in the business of helping low-income adults or moderate-income people without employer coverage get health insurance at all,” Aviva Aron-Dine, senior fellow at the center, told HuffPost. “Compared to pre-ACA, there would be some extra state grant money floating around – but it would have virtually no requirements attached to it at all and, since the funding wouldn’t adjust based on enrollment or costs, it would be hard for even well-intentioned states to use it to create an individual entitlement to coverage or help.”

Oh, and the bill would repeal the Affordable Care Act’s individual mandate, and do so right away ― destabilizing insurance markets and causing premiums to rise right away, according to official projections.

Exactly how many people would lose insurance, and what kind of benefits would be left for the people who hold onto coverage, is not clear. The Congressional Budget Office hasn’t had a chance to evaluate the plan yet, although Cassidy, like most Republicans these days, has already said he’s willing to ignore CBO altogether because he thinks their analysis is unreliable. (Actually, the CBO predictions of the Affordable Care Act’s ultimate coverage impact were quite good, even though some specific projections of the type of coverage people would have were way off.)

The substantive impact of the bill, and the rushed process Republicans are using to push it, makes the Cassidy-Graham bill looks a lot like the bills that failed to get majority votes back in July, when the Senate took them up.

And the politics of repeal would seem to be no more favorable for Republicans than they did then. The 2010 health care law, which has led to a historic decline in the number of people without insurance, has grown steadily, if incrementally, more popular during the repeal debate, according to polling. Clear majorities now prefer either keeping or improving the law, flaws and all, rather than getting rid of it outright.

As it happens, in just the past few weeks, a handful of Republican and Democratic senators have taken that instruction to heart. They have been working diligently on a different piece of legislation ― a narrowly tailored bill designed to shore up the program in the states where it is struggling and, in the process, find some common ground between the parties.

This was just the kind of effort that one Republican in particular, Sen. John McCain of Arizona, had insisted he wanted when he cast a dramatic and decisive vote against the final GOP repeal proposal to come up in late July ― and it would seem like he would be loathe to short-circuit this new bipartisan effort, now that it is underway. But McCain is also very close to Graham and at this point nobody knows how he’ll reconcile personal loyalty and political principle. (So far, McCain has sent out conflicting signals over how he feels about the Cassidy-Graham bill.)

Another factor in the bill’s eventual success or demise will be the way it shifts money among the states. Because of its complex funding formula, states like Alabama and Texas would initially see more funding, while states like California and Connecticut would see dramatic cuts, according to the same Center on Budget and Public Priorities analysis. The partisan tinge to the transformation is presumably intentional, since it’s mostly a transfer of money from Democratic states to Republican ones ― and, perversely, from those states that have tried hardest to expand coverage, by expanding their Medicaid programs and promoting enrollment, to those that have done as little as possible to help their citizens and in some cases worked actively to undermine the Affordable Care Act.

But the formula doesn’t work out perfectly for Republican states, according to the same analysis. By year ten, for example, Alaska, Ohio and West Virginia would all be losing money, and that’s politically critical since Alaska’s Lisa Murkowski was one of three Republican senators who voted no on the final repeal bill while the votes of Ohio’s Rob Portman and West Virginia’s Shelley Moore Capito were in play until the end, although they both voted yes.

Neither Capito, Murkowski, nor Portman have said much about the new bill, nor has Collins, who was the third member of the triumvirate to kill repeal last time. The only Republican senator to indicate a clear position on Cassidy-Graham so far has been Rand Paul, of Kentucky, who has said he’s a firm no ― ironically, if predictably, because it leaves too much of the Affordable Care Act’s edifice in place.

He might stick to that position and vote no, making the GOP vote math impossible unless leaders can somehow flip Murkowski (thought to be highly difficult) or Collins (thought to be impossible). Or he might change his mind. Or other Republicans could come out against the proposal.

It’s difficult to say. After all, the idea that repeal could come back now, despite repeal’s unpopularity, in the form of a proposal that in some respects is more radical than its predecessors, is difficult to fathom. And yet here we are.