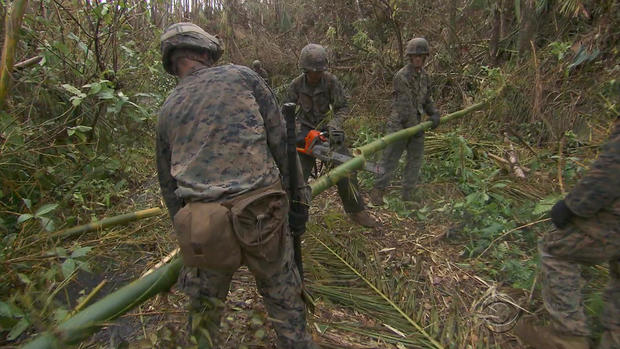 And three-star Army Gen. Jeffrey Buchanan, commander of the United States Army North, was chosen to direct the military’s response and will arrive later Thursday evening.

A platoon of U.S. Marines is cutting a path in the El Yunque National Forest, trying to get to a communication tower back up and running.

More than a week after Maria hit, Marines are still clearing roads; fallen trees and mudslides crippled the island’s road network and stalled the relief effort.

“You see us getting to critical infrastructure such as FAA towers,” Lt. Col. Mainz said. “As soon as we can get those up the more life-saving aid can come in.”

Some Marines were among the first on the ground after Maria ravaged the island. They were launched by air and by boat from the U.S. Navy’s USS Kearsarge. 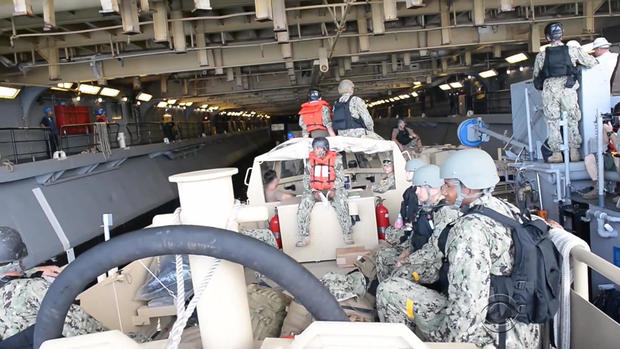 Villafranca, who was aboard the stowage deck of the USS Kearsarge, reports that there are 20 helicopters around Puerto Rico. They are no longer doing search and rescue missions and now are in full relief mode delivering vital supplies: generators, food, water, even tarps — so people can get their lives back to normal.

Because many on the island don’t have running water, Marines are taking salt water from the harbor and filtering it into drinkable water. 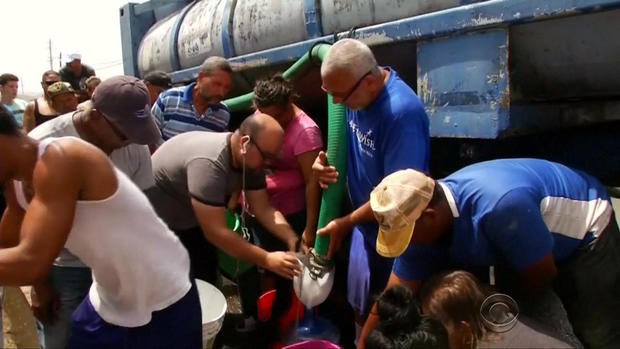 People rush to fill up containers with fresh water

Others are canvassing hospitals.

“We have fuel trucks sitting out there in what we call a ‘quick reaction force’ with Marines who are ready to go, map out which hospitals they have to go to and we will get there before the lights go out and people die,” Lt. Col. Mainz said.

Gen. Buchanan will link up with FEMA and local officials to help coordinate relief efforts. His top priority is getting supplies out of the port and to the people that need it.

Many parts of Puerto Rico are cut off, with communications down. CBS News’ David Begnaud traveled to Aguadilla, which was one of the hardest-hit towns on the western tip of Puerto Rico. 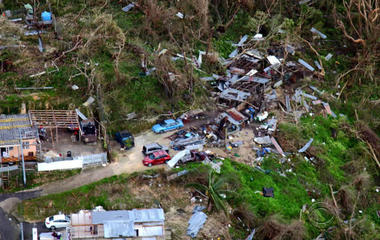 With communications down, many parts of Puerto Rico are cut off. David Begnaud traveled to Aguadilla, a hard-hit town on the island’s west coast,…

On the way there, Begnaud passed a military convoy — one of the first signs that help was finally on the way.

At least 1,500 homes in the area no longer have roofs following Maria.

Puerto Ricans waited for fuel for the eighth day in a row — the line stretched for miles.

Many crowded a local grocery store, but it only has food for another two weeks, Begnaud reports.

“Of course, I do. I need more help. I need FEMA. I need the Corp. of Engineers. I need you listening to me,” Mendez said. “But we’re going to get out of this one, I am sure that we will.”

“We have to keep hope alive,” he added. “It’s a mistake not to get up again. When you go down, you have to get up and that is exactly what we are doing.”