A new report outlines how the city failed to protect free expression and public safety. Video provided by Newsy Newslook 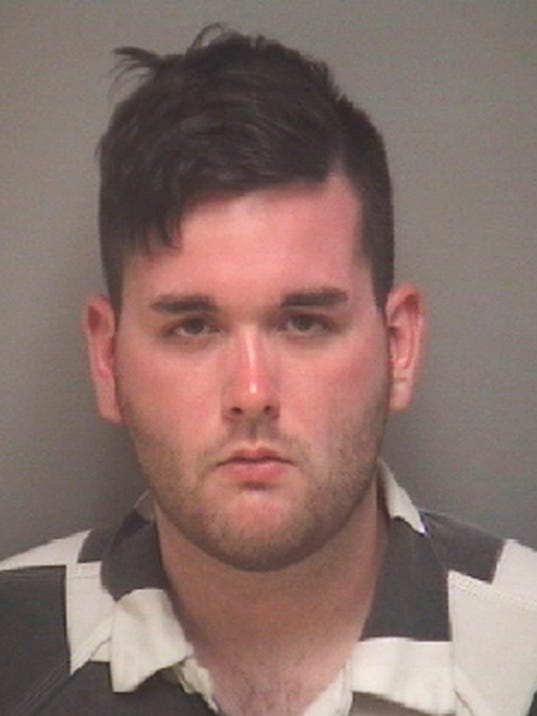 This photo provided by the Albemarle-Charlottesville Regional Jail shows James Alex Fields Jr., who was charged with second-degree murder and other counts after authorities say he rammed his car into a crowd of protesters Saturday, Aug. 12, 2017, in Charlottesville, Va., where a white supremacist rally took place.(Photo: AP)

The alleged reckless driver who plowed his car into a crowd protesting a white nationalist rally in Charlottesville, Va. is now charged with first-degree murder, after prosecutors showed a judge surveillance video of the deadly assault.

Prosecutors announced at the start of a preliminary hearing for James Alex Fields that they were seeking to upgrade the second-degree murder charge he previously faced in the Aug. 12 collision in Charlottesville that left 32-year-old Heather Heyer dead and dozens injured. The judge agreed to that and ruled there is probable cause for all charges against Fields to proceed.

Fields’ case will now be presented to a grand jury for an indictment.

Authorities had initially said that 19 people were injured, in addition to Heyer, when Fields rammed his 2010 Dodge Challenger into another vehicle on purpose on a crowded street. But testimony at the preliminary hearing revealed that there were many more victims, the Washington Post reported.

Fields, who lived in Ohio before his arrest, is charged with eight counts of “aggravated malicious wounding,” meaning that at least eight of the 35 people who were hurt suffered what Virginia law describes as “permanent and significant physical impairment,” the Post reported.

Authorities say the 20-year-old, described by a former teacher as having a keen interest in Nazi Germany and Adolf Hitler, drove his speeding car into a group of counterprotesters the day of the “Unite the Right” rally that drew hundreds of white nationalists from around the country. The attack came after the rally in this Virginia college town had descended into chaos — with violent brawling between attendees and counterdemonstrators — and authorities had forced the crowd to disband.

Surveillance footage from a Virginia State Police helicopter, played by prosecutors in court, captured the moment of impact by the car and the cursing of the startled troopers on board. The video then showed the car as it reversed, drove away and eventually pulled over.

The video, showed in court by prosecutor Nina-Alice Antony, included some of the final words in the helicopter by crew members, Lt. H. Jay Cullen and Trooper-Pilot Berke M.M. Bates, were monitoring the demonstration. About three hours after the airborne officers witnessed Fields’s alleged attack and followed his vehicle as it sped away, the helicopter crashed while Cullen and Bates were flying to another assignment, killing both men. The cause of the crash is still under investigation, the Post reported.

Fields, of Maumee, Ohio, sat quietly in a striped jumpsuit with his hands cuffed during the hearing.

His attorney Denise Lunsford did not present evidence or make any arguments at the hearing, although she did cross-examine the detective.

More: Why is Charlottesville ground zero for white supremacists?

Fields was photographed hours before the attack with a shield bearing the emblem of Vanguard America, one of the hate groups that took part in the rally, although the group denied any association with him.

A former teacher, Derek Weimer, has said Fields was fascinated in high school with Nazism, idolized Adolf Hitler, and had been singled out by officials at his Union, Kentucky, school for “deeply held, radical” convictions on race.

During her cross-examination of Charlottesville Police Det. Steven Young, Lunsford asked if searches of Fields’ computer, phone or social media revealed any evidence that he was part of Vanguard America or any other white nationalist group. Young said, “No.”

Young also testified that he was among the first officers to respond to the scene where Fields pulled over. No weapon was found in the car, he said.

Lunsford asked the detective what Fields said as he was being detained.

Fields said he was sorry and asked if people were OK, according to Young. When Fields was told someone had died, he appeared shocked and sobbed, Young said.

Young said authorities had identified 36 victims of the car attack, including Heyer — a number higher than officials have previously given. Some have significant injuries and are “wheelchair bound,” Young said.

Charlottesville General District Court Judge Robert Downer Jr. also presided over preliminary hearings Thursday for three other defendants. Charged in cases related to the August rally are Richard Preston, who is accused of firing a gun, and Jacob Goodwin and Alex Ramos, who are accused in an attack on a man in a parking garage that was captured in photos and video that went viral.

The judge certified the charges against all three men. All those cases will also head to a grand jury.

Jason Kessler, the main organizer of the Unite the Right rally, was in court for the hearings. When he arrived Thursday, a small crowd of angry protesters outside the courthouse chanted, “Blood on your hands.”